Agricultural land in the EU has seen a slight reduction over time — in general, because of afforestation and urbanisation and, in particular, urban sprawl.

It says the decrease in arable crop area is less pronounced than in the previous decade across both new and old Member States.

According to the Commission, the main reductions are in fallow land area (-1 % or 63,000ha per year) and arable crops other than cereals and oilseeds (-0.8 % per year).

The potato area is projected to continue its significant decrease, especially in the new Member States where it is mainly substituted by maize.

The Commission says nearly a third of agricultural land is permanent pasture, but this proportion is expected to drop marginally to 32.5% over the outlook period. 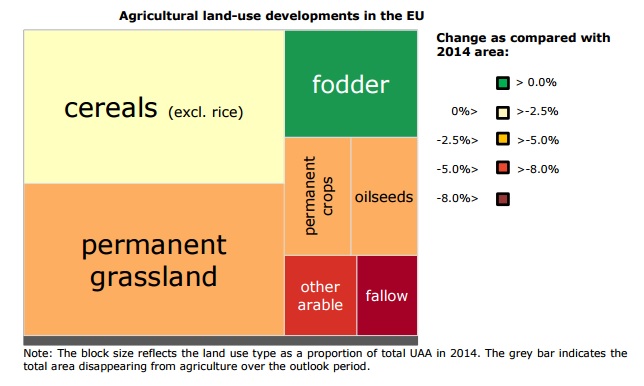 Across the EU, fodder crop area increased strongly in the past decade.

According to the Commission’s outlook, the increase was more pronounced in old Member States, mainly due to the use of green maize as feedstock for the production of biogas and temporary grasses and grazing for livestock production.

With the recent change in German support for biogas production, no further silage area increase is expected in these states. In the new Member States, the strong increase is projected to continue, driven by the expected further intensification of livestock production.

The Commission says the implementation of the CAP reform in the coming years is expected to result in a slight change in agricultural land-use patterns.

In its report it says, the ‘greening’ provisions are likely to affect various land-use categories. The measure aimed at preserving permanent grassland should help to slow down the disappearance of pasture area.

It says the measure aimed at preserving permanent grassland should help to slow down the disappearance of pasture area.

“We anticipate a further decline over the outlook period, although at a slower pace,” the report says.