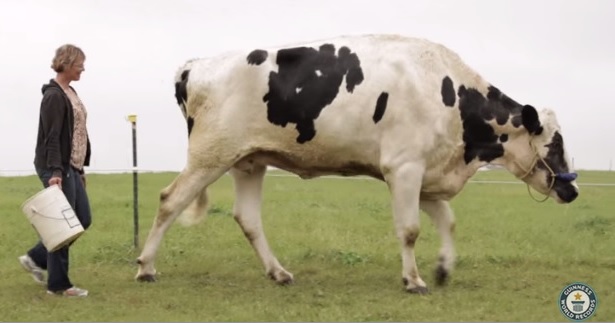 The Guinness Book of Records has some great farming facts and records, including the tallest cow and shortest bull in the world!

An American cow set the Guinness World Record for being the tallest cow ever in the world.

The Holstein dairy cow, called Blosom, measured 190cm (over 6ft tall) when the world record team visited her and her owner Patty Meads-Hanson in Illinois earlier in 2015.

Sadly, the cow passed away since then after sustaining an irreparable leg injury, according to Guinness.

Following further research, Guinness World Records confirmed that Blosom is now recognised as the title holder for Tallest Cow ever.

The highest recorded world lifetime yield of milk is 216,891kg as verified from the production certificate dated February 27, 2012, according to the Guinness World Records.

Smurf’s milk production is all kept on record because she gets tested once a month by an official measuring system as used by farms internationally, Guinness said.

Born on September 13, 1996, she was 15 years of age and the oldest cow on the farm at the time of her record-breaking achievement.

Archie is the shortest bull in the world and he resides in Co. Antrim.

The Guinness World Records says that he measures 76.2cm (30in) from the hoof to the withers, 15in shorter than other bulls of his breed (typically 45in).

The height of the bull, who is of the Dexter breed, means that he’s dwarfed by the other animals at his farm, including even the dogs and goats.

The largest sheep’s cheese weighed 534.7kg and was prepared by Comitato Promotore Fiera Castel Di Lama (Italy) and presented at the 15th edition of the Farm Exhibition of Vallata del Tronto in Castel di Lama, Italy, on May 29, 2009, according to Guinness.

The cheese was prepared in September 2009 (initial weight was around 800kg) and was weighted, after nine months of ageing.

The world’s oldest goat ever is McGinty who lived until the grand age of 22 years 5 months, Guinness World Records show.

Until her death in November 2003, McGinty was owned by Doris C. Long of Hayling Island, Hampshire, UK.