Lambing gets off to a great start 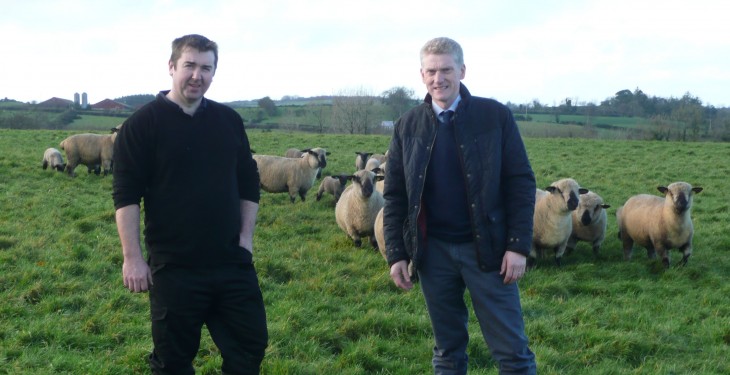 The View from Northern Ireland: Lambing has begun on Tony McGrath’s farm in Brantry, Dungannon. His 20 ewe Hampshire flock was sponged and artificially inseminated in July and has recently lambed down with a lambing percentage of 170 per cent.

McGrath’s flock, established three years ago, has already enjoyed tremendous success and received numerous rosettes this year at Balmoral show. Mindful that he must also produce sheep for the commercial breeder, McGrath’s places a strong emphasis on selecting rams with high Estimated Breeding Values (EBV) and has one of the highest indexed flocks in the country. His aim is to sell rams that can produce commercial lambs capable of finishing at 10-12 weeks of age.

McGrath’s firmly believes that feeding ewes the correct concentrate prior to lambing is the key to good lamb survival, viability and profitability.

Although there have been ample grass supplies this autumn, a good quality ewe concentrate is essential for ewes pre-lambing. This ensures good supplies of colostrum, fast-growing lambs and reduced twin lamb disease.

Twin suckling ewes receive around one kg of concentrate per day, which continues for around eight weeks until peak lactation has passed. Ewe concentrate is then reduced with more emphasis being placed on creep feeding the lambs.

Brian Hanthorn from the College of Agriculture Food and Rural Enterprise has guided and advised McGrath on what to look out for in a good ewe ration as well as the feeding regime. Hanthorn recommends examining the feed label in detail. Soya bean meal and cereals should feature strongly on the list and avoid the cheaper filler ingredients which can reduce milk yields. If you are interested in finding out more about pre-lambing feeding or would like to attend a short information course on this subject, you can contact Martina Donnelly on 00 4428 8775 4771 or Brian Hanthorn 00 447881 550 865.