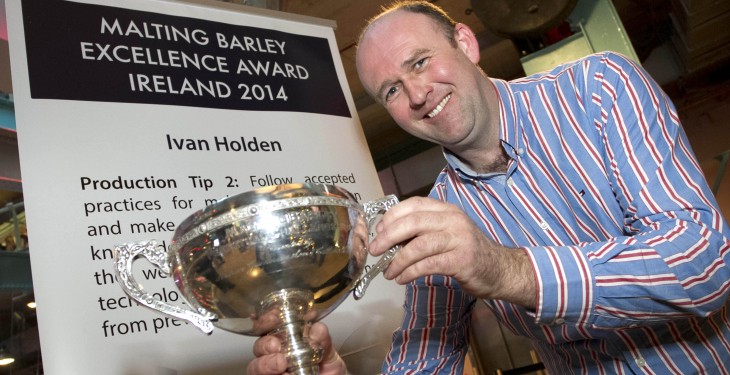 Minister Simon Coveney was guest of honour at the awards, which recognise excellence in malting barley production and promote sustainability in the malting barley supply chain. There are over 600 barley growers in Ireland.

The awards are organised by Boormalt, one of the largest producers of malt in the world and hosted by Diageo, the largest purchaser of malting barley in Ireland. Domestic barley purchased by Diageo Ireland amounts to more than twice the value of Ireland’s total barley exports – over 300 tonnes of barley is used daily to make Guinness.

Paul Armstrong, Supply Director of Brewing at the International Supply Centre said the Malting Excellence Awards are a way for Diageo and Boormalt to recognise the role that Irish tillage farmers play in producing quality malt that allows us to produce premium product for export across the world, highlighting the contribution farmers across the country make to the Irish drinks industry.

“In total, the drinks industry spends €400 million on raw materials from farms across Ireland every year, supporting 5,000 farming families.

“Diageo is one of the most important contributors to the Irish rural economy, buying more Irish barley than anyone else. 2014 was a hugely significant year for Diageo’s Guinness production, we opened Brewhouse No. 4 a state of the art facility that will use approximately 13% of Ireland’s total annual domestic production of barley. Brewhouse No. 4 produces 300,000 pints per brew every two hours, allowing for a substantial boost in exports.

“This positions St. James’ at the global forefront of sustainable and historic brewing for decades to come and will deepen the relationship between Diageo and Ireland’s agricultural sector.”

Peter Nallen Boortmalt Group COO said, for Boortmalt, securing the right malting barley quality and the correct quantity, year on year is paramount as it builds further confidence and sustainability in its Irish supply chain to match its business ambition to see full capacity utilisation of the malting plant in Athy.