Between 2016 and 2026, Ireland is expected to show the highest percentage growth in milk production in the EU, with growth of 41%, the latest medium term Agricultural Outlook by European Commission has found.

In the next decade, EU milk production is expected to rise moderately by 1.3m tonnes per year on average.

About 75% of the EU’s expected total milk supply increase between 2016 and 2026 (+13m tonnes) will be realised in five Member States, namely Germany, Ireland, the UK, France and the Netherlands, according to the outlook.

Over that period, with Ireland expected to show the highest percentage growth, Germany is expected to have the largest volume increase (+3.4m tonnes).

The Netherlands, Czech Republic and Belgium exhibit a moderate supply increase in the range of 6 to 12% while Poland, Italy, Spain and Denmark show slower growth. 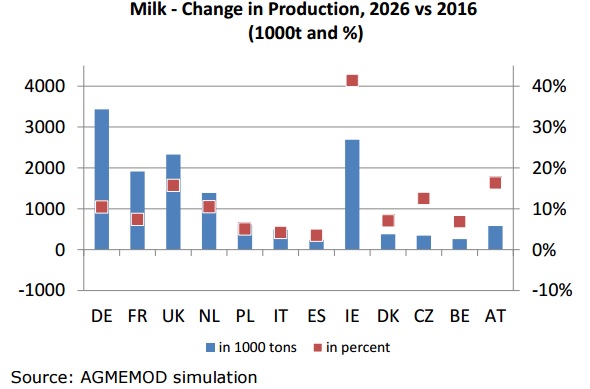 These differences reflect variations in yield growth, dairy herd evolution, competitiveness and environmental constraints, according to the outlook.

Above average yield growth rates are projected in the report for Ireland, Spain and the Czech Republic, even in Member States where the level of milk yield is currently already high.

With the exception of Ireland, where cow numbers are projected to continue to grow, a decline in the size of the dairy herd is projected across the EU.

The rise in milk production in the next decade is expected to be moderate and smaller than what occurred in the recent past.

It is anticipated that after these few exceptional years linked to some extent to quota expiry, market fundamentals will drive the market.

If any specific target to reduce greenhouse gas emissions were to be implemented by a Member State, the report found that it could affect strongly a number of Member States, such as the Irish cattle herd.