Figures from data analyst and consultation firm Kantar are showing that the grocery market in Ireland remains strong, despite Brexit uncertainty.

The market grew by 3.3% in the 12 weeks leading up to October 6, with shoppers visiting stores more often, and making larger trips in that period than they did in the same period last year.

In terms of market share, Dunnes Stores still comes out on top of the pile, holding a lead of 1.3% over the next largest retailer, for a total market share of 22.5%.

Charlotte Scott, consumer insights director with Kantar, said: “It has been a big year for Dunnes. Its continued success, evidenced by 5.5% sales growth in the past 12 weeks, has largely been driven by its ‘Shop and Save’ voucher campaign.”

Apart from Dunnes, SuperValu is also performing strongly, with a boost in sales over the 12 weeks to October 6, and a current growth rate of 2% – for a total market share of 21.2%.

This has allowed SuperValu to overtake Tesco, and become the second-largest retailer for the first time since December 2018.

This is down to SuperValu’s “larger basket sizes and growth in some of its core categories”, Kantar said.

Despite falling behind SuperValu, Tesco still grew in the 12-week period to achieve a market share of 21.1%, with shoppers making an extra trip compared to last year.

Kantar attributes this to Tesco’s 31.1% growth in the confectionery category, something the retailer will be “particularly encouraged by” in the run up to Halloween and Christmas.

Aldi and Lidl also performed well, with increases in both of their market shares – 12.6% and 11.9% respectively (the figure for Aldi is a new record for the retailer).

Traditionally, Aldi’s core shoppers are young and mid-range families, with these customers still a third more likely to shop at the retailer than any other group. However, growth among these groups has slowed to 0.8%, as the cohort has cut back on its overall spending by 1.4%.

“In response, Aldi has brought back its popular ‘Big Toy Event’, aimed at drawing these shoppers back into stores, and offering something for the little ones,” Scott explained.

For Lidl, existing shoppers are making more trips to the retailer, and spending more; however, penetration has dropped slightly by 0.4%.

With all these gains among the big players, it’s perhaps no surprise that ‘Other’ outlets saw their combined market share drop by 4.1% in the 12-week period.

Kantar also highlighted that grocery market inflation in that period stood at 1.46%. 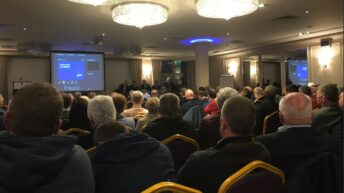