In light of the pig compound feed figures recently compiled by the EU showing huge differences that are costing Irish pig farmers up to €30m/year, the Irish compound feed trade has serious questions to answer according to IFA Input Project Team leader James McCarthy.

He said as we are an island nation, historically, there has been a small difference between Ireland and other major EU producers on feed costs due to Ireland’s necessity to import raw materials and our purely cereal based diet.

However, according to McCarthy since mid-2012, this differential has started to increase exponentially (Fig 1).

“Feed makes up over 70% of the cost of producing a pig and with composite feed prices almost €50/tonne cheaper for our main pig producing EU neighbours, Irish pig farmers are at an unsustainable disadvantage.” 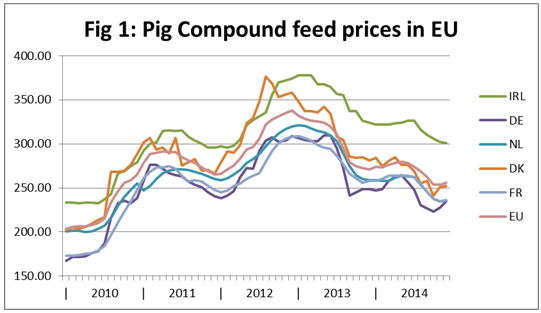 IFA Pigs Committee Chairman Pat O’Flaherty said pig producers are back in a very negative situation as pig prices have fallen by 42c/kg since July 2014.

“Irish prices in 2014 were roughly on a par with the EU average pig price, but unfortunately our farmers are without the benefit of the cheaper compound feed prices our EU counterparts can access. These lower priced feeds significantly increase their competitiveness and dampen the pain that their producers are experiencing. A differential of €50/tonne is equivalent to over €30million extra cost on Irish pig farms.

“IFA met with all the millers last year, but they are clearly hiding behind poor purchasing decisions and profiteering by refusing to properly reflect input price decreases back to farmers. Decreases in feed prices are long overdue and this EU information shows categorically that Irish pig farmers are being exploited by the compound feed trade. Unless the trade address this massive gap immediately, farmers will have no chance but to have the situation fully investigated by the Consumer and Competition Authority,” O’Flaherty said.