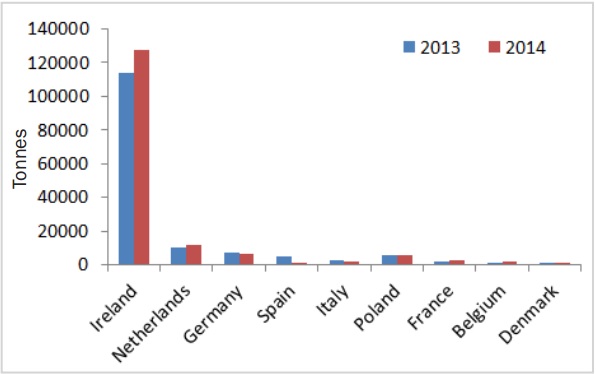 Ireland continues to be the biggest exporter of beef into the UK market with 127,786 tonnes imported in the first nine months of 2014 according to the Livestock and Meat Commission in Northern Ireland (LMC).

It says this was an increase of 12% on the corresponding period in 2013 and accounted for 79% of imports from EU countries.

The LMC outlines that in total beef imports into the UK during the period January to September 2014 totalled 181,139 tonnes compared to 172,420 tonnes in the corresponding period in 2013. This accounts for a 5% increase year on year.

It says while total beef imports have increased year on year the proportion imported from non EU countries has declined. Overall imports of beef from non-EU countries accounted for 11% of total imports in the 2014 period compared to 14% in the corresponding period in 2013.

There have been notable declines in beef imports to the UK from Uruguay, Brazil, Namibia, Argentina and Botswana year on year. However the volume imported from Australia and New Zealand has increased over the same period.