Following the in footsteps of the Irish Limousin Cattle Society (ILCS), this week the Irish Aberdeen-Angus Association (IAAA) has also made the move to appoint a new member of staff to its ranks in the form of Dr. Felicity McGrath as their new general manager.

The position will involve McGrath overseeing the societies’ operations and newly-licenced Herd Book in the Republic of Ireland.

The company is embarking on its post Brexit journey and move away from the  Aberdeen-Angus Cattle Society based in the UK.

Coming from an agricultural background in Co. Galway, Felicity McGrath is currently farming in partnership with her mother Patricia in Ballinasloe. She is also not a stranger to the Aberdeen Angus breed, as they operate and show Angus cattle under Gortnalon herd prefix. 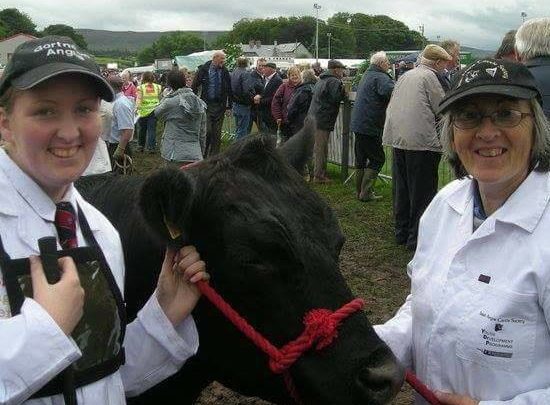 Felicity McGrath with her mother Patricia

Completing a PhD in physics at Imperial College London, Felicity subsequently worked in the UK for six years, and returned to Ireland in 2018.

Upon the return home to her native county, she managed Athenry-based agri-business Bo Steel – which manufactures and sells agricultural livestock equipment.

‘The appointment puts us on the map’

Speaking about the new appointment, John McEnroe, president of the IAAA stated:

“We are very confident that Felicity will bring a new dimension to the association. Her enthusiasm, experience and willingness to just get stuck in will be an asset to the members of the association in the months and years to come.

The appointment puts us on the map and confirms the commitment that the association must be a successful stand-alone breed society and business, after being under the wing of the Aberdeen-Angus Cattle Society in the UK for some 125 years.

“Felicity starts with the association on March 29, 2021 and will be working with Kathryn Bradshaw, the council and the presidential team to get up to speed as quickly as possible with the new business.

“She looks forward to getting out and about when the restrictions allow to meet as many of the members and stake holders as possible.”