Interested in Fleckvieh cattle? – Check them out at the Ploughing 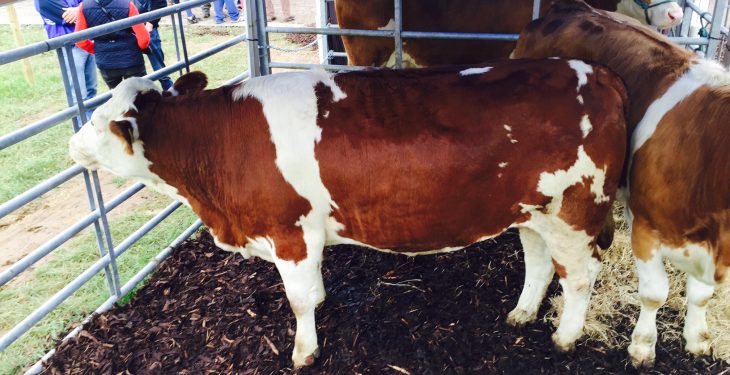 Fleckvieh cattle, the world’s second largest dairy breed, will be on display for the first time at this week’s National Ploughing Championships 2016 in Tullamore, Co. Offaly.

The breed, which is native to Austria, Switzerland and Southern Germany, has grown in popularity on both Irish and European farms in recent years.

Over the past 10 years, the breed has grown to become the number one cross used on Dutch dairy farms.

Celtic Sires are agents for Fleckvieh genetics in Ireland and it says that the breed is relatively new to the southern Irish market, but it has made significant inroads as a cross on the Holstein herd in Northern Ireland in the last few years.

According to Celtic Sires, Fleckvieh’s are a very fertile breed with excellent beef qualities which make them a popular choice for dairy farmers.

Other key characteristics of the breed include good calf value, easy calving and a high cull value, which it says are useful in times of low milk prices.

In year such as this, the beef qualities of the breed offer farmers insurance against a single poor income source from low milk prices.

Although Fleckvieh produce somewhat less milk than pure Holsteins as a breed, they generally have higher fat and protein percentages.

Selection over the last 20 years has focused on milk volume and health traits, it says, with all fertility and udder health issues being recorded in detail, and AI bulls ranked for each of these criteria.

Another key characteristic of the breed is longevity, which is achieved through good fertility and excellent performance on all health traits.

Fleckvieh are in fact a Dairy Simmental, and are recognised internationally as a single breed, similar to how Holstein and British Friesian operate.

The bloodlines known now as “Fleckvieh” are bred with a very strong emphasis on milk, and are registered in a Dairy Fleckvieh section of the herd book by the Irish Simmental Society, distinct from the Beef Simmental book.

Visit the Fleckvieh stand at this year’s Ploughing

For farmers wanting to take a closer look at the Fleckvieh breed, the Celtic Sires Ploughing exhibit will include a cow-in-milk and two in-calf heifers.

The Celtic Sires exhibition is located at stand number 459, close to gate number 13.

Ploughing weather: Sunny spells with temperatures in the mid-teens