Increase in grass growth in the North, despite volatile season

Grass growth in the North last year was up 21% compared with the 2007-2015 long term average, according to figures from the GrassCheck project.

But when both grass growth and grass quality were more closely examined, an incredibly volatile season became more apparent, the Agri-Food and Biosciences Institute (AFBI) said.

The GrassCheck project, which is run by AFBI and supported by CAFRE as well as the Department of Agriculture, Environment and Rural Affairs, monitors grass trends throughout the season.

Grass growth rates and grass quality were measured weekly at four sites across Hillsborough in Co. Down and Greenmount in Co. Antrim.

The 2016 figures were examined and discussed by Debbie McConnell and Scott Laidlaw from AFBI as well as Stephen Gilkinson from CAFRE.

Across the four GrassCheck sites, the average annual yield of grass dry matter (DM) production was 13.6t DM/ha, an increase of 0.5t DM/ha from 2015 and 2.4t DM/ha greater than the long term GrassCheck average, figures show.

However, this year wasn’t a typical representative season with wide variability in grass growth rates: 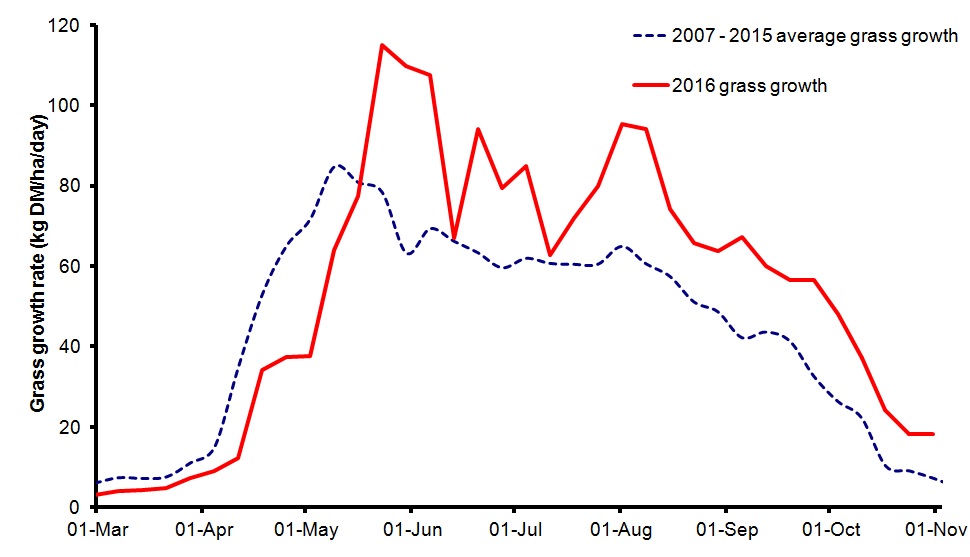 Across Northern Ireland, growing conditions in early spring were poor with cold and particularly wet conditions experienced in February and April, the experts said.

But by the end of April rainfall totals were seen to be 20% higher than the average for that time of year.

The experts believe that because soils failed to dry out through the short dry spell in March, a total deficit of 1t DM/ha was evident after the first 12 weeks of the season compared to the long term average.

Following this, grass growth conditions were volatile from mid-May to the end of July, making grass management extremely challenging.

Meanwhile, the late spring meant that although May was warmer than average, grasses entered their annual reproductive phase much later than normal, the experts said.

As a result, this delayed ear emergence by about three weeks resulting in a very high but delayed spring peak, they added.

Although volatile, grass growth rates remained very strong through the summer months averaging 80kg DM/ha per day at the Hillsborough and Greenmount sites.

The typical check in soil moisture usually evident at this time of year did not appear in the east of Northern Ireland and grass growth was high over the summer months, totalling 7.3t DM/ha from June to August. 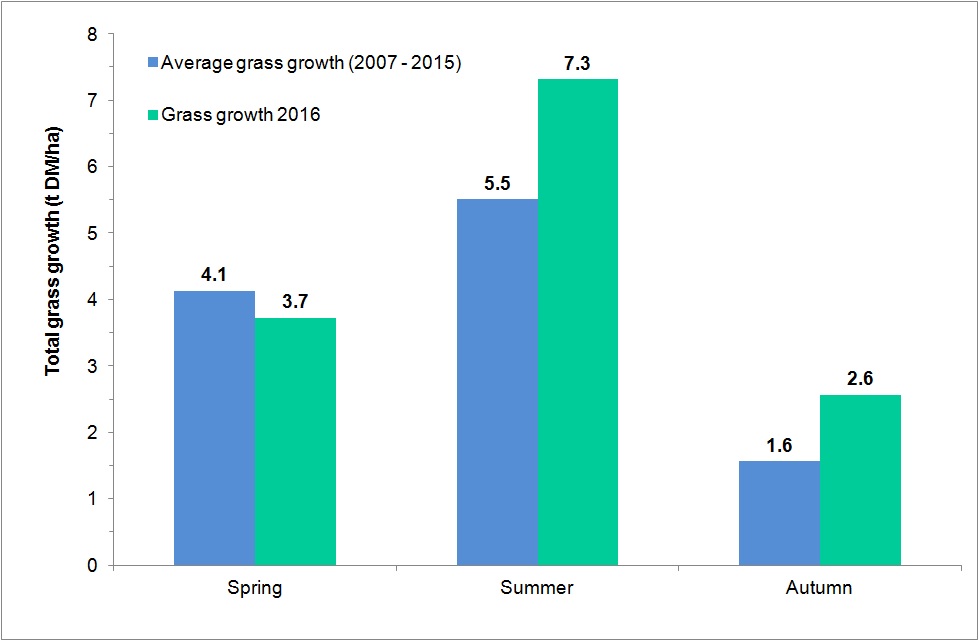 However, it was a tale of two halves during the summer months with the western side of the North experiencing hugely challenging grass management conditions, according to the experts.

Data from Omagh shows an extra 315mm of rainfall fell during the period from June to September compared with the Hillsborough site. 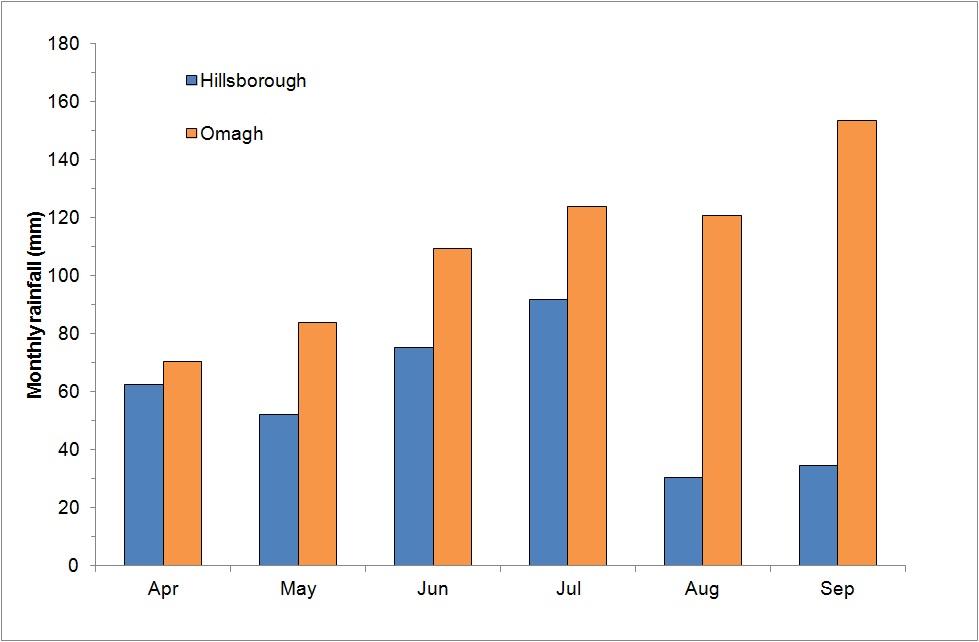 This is equivalent to an extra 3.15m litres of water falling on each hectare of land during this time, driving soil moisture levels up significantly, they said.

The experts believe this made both grazing and silage harvesting extremely difficult if not impossible for many farmers in western areas of the country.

Good grass conditions eventually returned to most of the North during autumn with growth rates averaging 42.9kg DM/ha per day for September and October, double that expected for the time of year.

Low soil moisture levels also provided a great opportunity to hit target final round residuals and to set up the grazing platform for next season, they said. 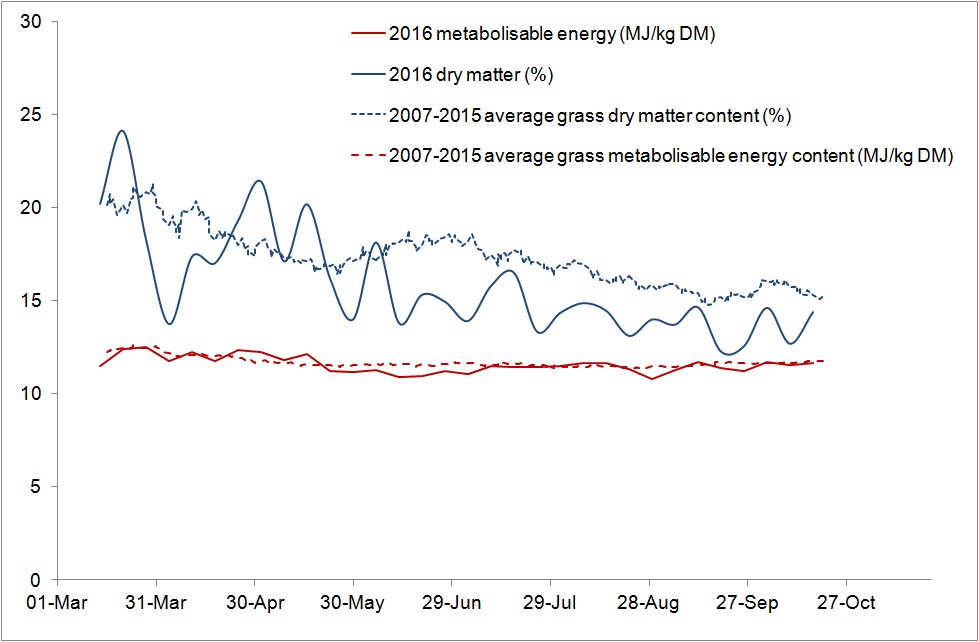 Figure 4: Measured grass dry matter and metabolisable energy content for the 2016 growing season at Greenmount and Hillsborough compared with the 2007 – 2015 long term average

Grass dry matter contents, however, presented much more of a challenge this summer.

Figures show that they dropped below 14% throughout June, July and August, increasing the requirement for bought-in feeds to provide sufficient energy to livestock.

On average, grass dry matter content was 1.5% lower throughout the season than the long term average, which is 17.2%, according to GrassCheck.

20 things you didn't know about soils

Vintage tractor and car run set to motor this weekend