Recent weeks has seen a significant fall in the imports of lambs from Northern Ireland for slaughter in the Republic, according to the Livestock and Meat Commission (LMC).

The LMC says total lamb and hogget throughput has increased in Northern plants in recent weeks with 7,138 head slaughtered last week. It says this is the highest weekly throughput since the start of January 2015.

According to the LMC, the increase in throughput locally can be attributed to a notable decline in exports of lambs/hoggets to the Republic for direct slaughter in recent weeks with increased availability for local processors as a result.

However, it also says that it is worth noting that exports to the Republic for direct slaughter also recorded a marked decline at the same time last year with the hogget season coming to an end and the lamb trade not yet in full swing . 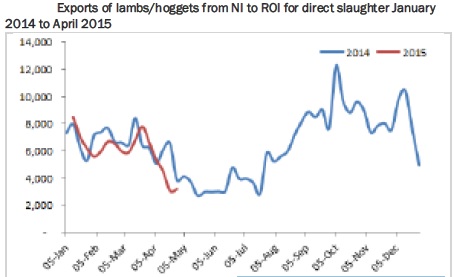 In recent weeks there has been a lot of discussion around changes to EU labelling legislation which came into effect from 1 April 2015 and is reportedly having a significant influence in the cross border trade of sheep.

Under the new legislation meat from sheep born in Northern Ireland and killed in the Republic needs to be labelled as born in the UK and slaughtered in Republic Of Ireland.

The LMC says reports have indicated that these labelling changes are causing some issues for Southern processors in servicing certain markets.

LMC’s understanding is that animals that are exported from Northern Ireland for slaughter in the Republic plants and then exported in carcase form are not affected by these changes to labelling legislation, however this is a lower value market when compared to boned out lamb.

It says figures from Eurostat for January and February 2015 indicate that 70% of Irish lamb exports were boned out as this is a higher value market. The remaining 30% exported in carcase form.

The LMC says France remains the biggest market for lamb exported from the Republic and received 42% of lamb exports from Republic during 2014 with a further 23% destined for the UK market during the first two months of 2015. 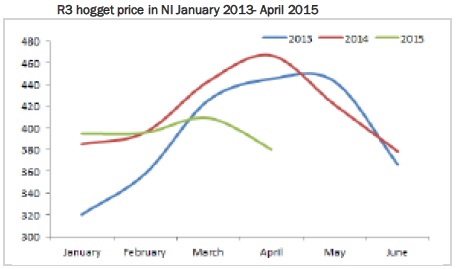 While the labelling issue is undoubtedly having an influence on the Northern lamb market there are a number of other factors that influence the Northern Ireland sheep market which must also be considered, according to the LMC.

With euro continuing to remain weak against sterling it makes cross border trading of lamb less attractive. The LMC also cites poorer quality stock coming forward for slaughter, lower prices in the Republic and reduced demand as other factors.

However, it says with the Republic being such an important outlet for Northern origin sheep in recent years since Foyle ceased killing lambs it is important that every step is taken to ensure a quick and effective resolution to the current issues around the implementation of the new EU legislation.