‘If you get into bad cows you will breed bad cattle’

The demise of the national suckler cow herd was the basis of a meeting recently organised by the Irish Farm-Family Rights Group, also known as the Farm Rights Group (FRG).

The meeting – which was attended by between 150 and 200 people – was held in the Tullamore Court Hotel in Co. Offaly last Friday night, January 19.

A payment of €300 per suckler cow is being sought by the group in order to save the faltering sector, which was described as the “poor relation” of the dairy industry.

This motion was backed by everyone in the room, with attendees consisting of suckler farmers, mart managers, cattle traders as well as representatives from various beef breed societies.

FRG chairman Donie Shine believes that calling for a €200 payment per suckler cow is “selling out farmers” and he described it as “wrong”.

This is just not enough, he said. He called on farmers to stand firm in their request for a justifiable and reasonable payment.

The FRG has requested a meeting with the Minister for Agriculture, Food and the Marine, Michael Creed, to discuss the issue – with one expected to take place in the coming weeks.

The FRG has claimed that dairy-breed progeny is now infiltrating the suckler sector and the beef carcass is suffering as a result.

At the meeting, the quality of cattle appearing in marts across the country was lamented by those present; the Beef Data and Genomics Programme (BDGP) also came in for particular criticism on the night – with one farmer stating that it has done “more harm than good“.

Those present at the meeting believed that the current stars system has forced farmers to “get rid of their good cattle” in favour of animals with four and five-star ratings.

Cattle traders and mart representatives were adamant that the quality of cattle has diminished drastically in recent years under the star rating system. They believed that the cattle’s star rating did not match up with their appearance.

The reliability of these star ratings was also brought into question at the meeting.

One farmer expressed his concerns that the skill of judging stock has been lost on younger generations of farmers, as they turn to a screen or smartphone to consult statistics.

Commenting at the meeting, Glen Cooper – manager of Mountrath Mart, Co. Laois – said: “If you get into bad cows, you will breed bad cattle – no matter what bull you use.

We need to hold on to live export markets for good-quality cattle.

Traditionally, the mart has a strong customer base travelling from Northern Ireland and further afield who come to purchase cattle for export. But, encouraging these buyers to return is becoming increasingly difficult as the quality of cattle appearing in the mart dips, he added.

There was a particular sense of urgency at the meeting and the common consensus was that measures need to be put in place for a €300 payment per suckler cow in the near future.

If this is put on the long finger or postponed until CAP post-2020, there will be significantly less suckler farmers left to save in Ireland, according to the FRG.

Higher numbers of suckler cows appearing in marts over the past few months is indicative of this, the group concluded. 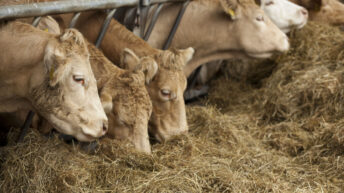