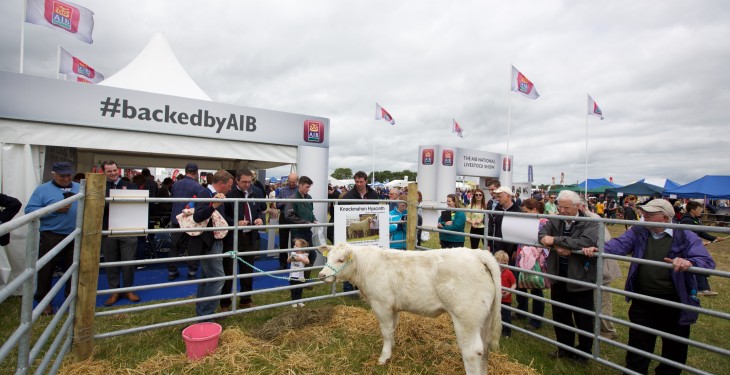 The ‘Guess the weight’ of the heifer winner from the Tullamore Show has been announced and the Charolais heifer is heading to Kildare.

Ber Dunne was just one of a record number of people attended this year’s Tullamore Show and AIB National Livestock Show with an attendance of over 60,000 people.

To celebrate their long running partnership with the National Livestock Show, AIB ran a ‘Guess the Weight’ competition at the AIB Marquee.

Attendees were asked to guess the weight of the ‘Knockmahon Lady’ calf. The pedigree Charolais heifer calf was supplied by Kilkenny farmer Christy Comerford and sponsored by AIB.

The Kilkenny breeder was the previous winner of the Charolais Heifer of the Year and Supreme Overall Champion at the 2014 AIB National Livestock Show.

This heifer is now heading home with Ber Dunne from county Kildare who correctly guessed the weight of the calf as 258kg.

The heifer’s breeder Christy Comerford wished the new owner every success and hopes the heifer will provide the foundations of a pedigree herd.

“I am delighted to be providing this calf as a prize for AIB and the Tullamore Show. I hope she makes a foundation for another pedigree herd and I wish Ber Dunne the very best of luck with her,” he said.

Freda Kinnarney, Secretary of the Tullamore Show thanked AIB for their continued sponsorship which has allowed the show to grow from strength to strength.

‘With AIB’s support as chief sponsor, the AIB National Livestock Show continues to go from strength to strength year after year.

“This year was the most successful year to date with a record number of attendees and yet again the highest standards in each class of the competition.”

AIB’s Anne Finnegan added that the livestock show is a celebration of the hard work that goes into livestock and breeding,

The Head of the AIB agricultural sector also said that it is encouraging to hear so many farmers and families talking positively about their business and future prospects.