Hogan resigned yesterday evening (Wednesday, August 26) following the mounting fallout from his attendance at the Oireachtas Golf Society function last week, and the ensuing public debate about his conduct in relation to public health guidelines.

MEP for Dublin Ciarán Cuffe said that Hogan’s resignation was “necessary to rebuild the public’s confidence in the measures and guidance put in place to protect citizens from Covid-19”.

“The Irish public has made huge sacrifices to comply with health guidelines and it is important that public figures respect these rules too,” Cuffe added.

“President Ursula von der Leyen has done the right thing by holding Hogan to account for his actions.”

Grace O’Sullivan, MEP for Ireland South, said she “looks forward to welcoming a new commissioner to Brussels”, and that she is “confident the government will choose an able replacement who will work with integrity in the interests of Ireland and the EU as a whole”.

In a statement yesterday evening following his resignation, Hogan said: “This evening I have tendered my resignation as EU Trade Commissioner to the President of the European Commission, Dr. Ursula von der Leyen.

It was becoming increasingly clear that the controversy concerning my recent visit to Ireland was becoming a distraction from my work as an EU Commissioner and would undermine my work in the key months ahead.

“I deeply regret that my trip to Ireland – the country that I have been so proud to represent as a public servant for most of my adult life – caused such concern, unease and upset. 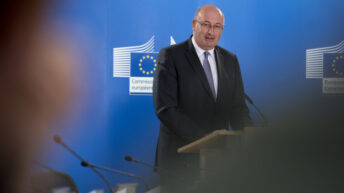