A total of 7,357 Green Low-Carbon Agri-Environment Scheme (GLAS) 1 and 2 applicants are awaiting payment under the scheme, the latest figures from the Minister for Agriculture, Michael Creed, have shown.

The Minister revealed the figures in response to a parliamentary question from Fianna Fail’s Spokesperson for Agriculture, Charlie McConalogue.

Some 29,940 farmers under the two tranches of the scheme have been paid to date.

The Minister also provided a county-by-county breakdown of farmers who have yet to be paid under the scheme: 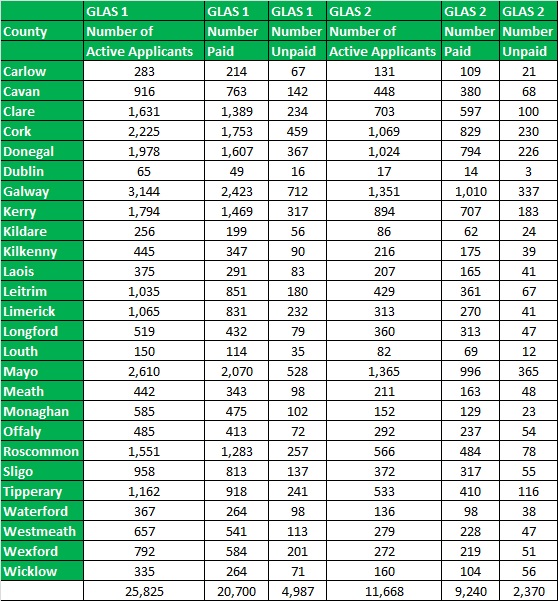 On Agri-Environment Scheme (AEOS) payments, the Minister said that under the EU Regulations governing the scheme and other area-based payment schemes, a comprehensive administrative check, including cross checks with the Land Parcel Identification System must take place.

“As all AEOS 2 participants will be receiving their final payments under the scheme, re-checks on payments made for all scheme years must be completed before final payment can be processed.

“Officials are working through these files and payment will be made in all cases as soon as possible. All cleared cases are being paid on a weekly basis.”

Some 2,234 farmers are awaiting payment under the scheme to date, with 6,316 farmers paid, the figures show. 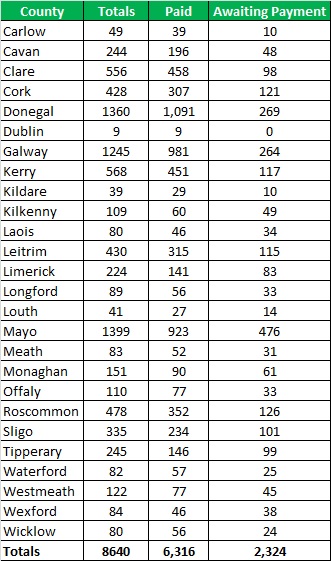 Last week, IFA Rural Development Chairman, Joe Brady said that it is absolutely unacceptable that farmers who joined the GLAS scheme almost two years ago, and who were promised payments last October are still waiting with no definite answers as to when they can expect to get paid.

He called on the Minister for Agriculture to immediately pursue with the European Commission the IFA proposal that all farmers awaiting GLAS payments are now paid and that any issues surrounding plans would be sorted out later.

In addition, IFA has urged the Department that where particular measures in a GLAS plan are cleared, payments should be made to farmers on these qualifying measures, even where there are issues with other measures in the plan.