This is according to EBLEX which also says it is the lowest first quarter production for many years, being slightly lower than the recent low recorded in 2009.

This is good news for Ireland as France remains the principal destination for Irish lamb, although it now accounts for less than 45% of total exports. Last year shipments were marginally higher at 18,000 tonnes with Irish trade with France valued at just over €90m.

EBLEX suggests that the fall in French production comes as a result of fewer lambs being carried over into 2014 and the later Easter meaning the likelihood of more animals being held onto to be slaughtered in April.

However, it also says that it is part of a longer term trend where French sheep meat production has been falling and continues to decline as the French sheep flock drops. 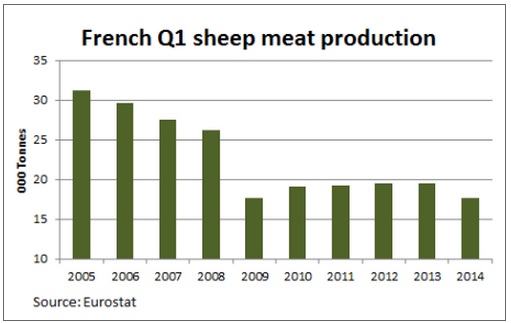 EBLEX state looking at the supply for the rest of year, there might be some increase in volumes with production for the whole of 2014 forecast to be around two per cent lower. However, the trend is still for declining production, with a further fall forecast for 2015.