According to new figures released today by Bord Bia, the value of Irish food and drink exports has increased by more than 8 per cent, or €370m, during the first six months of the year, relative to the same period last year. 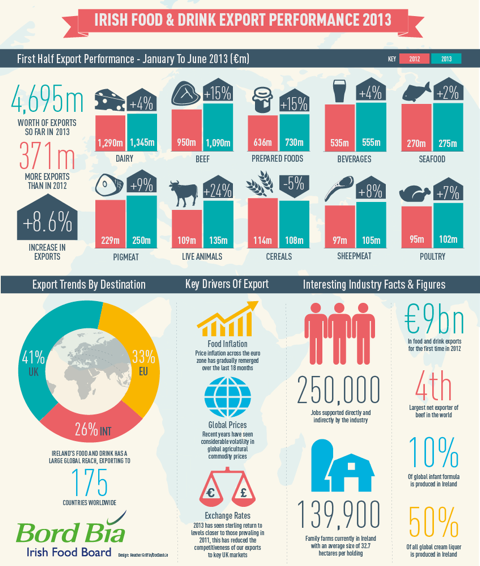 This increase was driven by a particularly strong performance in beef exports – up by 15 per cent or €140 million, accounting for almost 40 per cent of the total growth. Other strongly performing categories were prepared foods (+15 per cent), and dairy (+4 per cent), while pigmeat (+9 per cent) and beverages (+4 per cent) also recorded solid growth.

Commenting on the outcome, Aidan Cotter, ceo of Bord Bia said: “The export figures for the first half of the year are particularly impressive at a time when overall exports have fallen by some 6 per cent. Last year, Ireland’s food and drink exports surpassed the €9bn mark for the first time and the prospects for the remainder of 2013 remain broadly positive with a strong demand for dairy and beef, combined with a more robust prepared foods performance and further steady growth in beverages.”

“The performance of Irish beef exports in the first half year has been particularly striking, comprising a volume growth of almost 10 per cent and price growth of 5 per cent, driving the value of beef exports to reach almost €1.1bn. The higher volume, which is set to continue through this year and into 2014, was anticipated, and follows a cyclically low volume in 2012,” added Cotter.

“The price growth on the other hand is reflected in prime Irish cattle currently reaching 109 per cent of corresponding EU prices, up from 98 per cent at the beginning of the year. This has been driven largely by strong demand from the UK, Ireland’s largest beef market, during a period strongly marked by the contamination of processed beef products and issues of consumer trust.”

The resilience of the beef market may also be associated with the strong demand for cattle from the Bord Bia Quality Assurance Scheme, whose membership has now risen to 36,400 producers. Today, some 85 per cent of Irish beef production is being sourced from approved farms, up from 78 per cent in 2012, with applications for membership in the year to date up by 135 per cent to 5,700. The sharp rise reflects a doubling of the bonus paid by beef processors for cattle from approved farms.

In the meantime, there are signs of a continuing recovery in the processed beef segment of the UK market. Retail sales of fresh and frozen burgers and grills, according to Kantar Worldpanel, were 17.8 per cent higher for the four weeks ending 7 July compared with the corresponding period a year ago.

Earlier, in the period to mid-April, in the midst of the horsemeat crisis, sales of this category had dropped by as much as 43.2 per cent.

Stronger global dairy product prices, which in most cases were more than 20 per cent ahead of year earlier levels, helped offset lower milk intake due to poor grazing conditions for much of the spring. Dairy exports increased by €55m to exceed €1.3bn. Prospects for the immediate period ahead remain positive with much thereafter depending on the level of supply response to the current strong global prices.

Despite the ongoing competitive challenges faced by prepared foods exporters the value of trade recorded a rise of 15 per cent (€94m), on the disappointing levels recorded in the first half of 2012, to reach approximately €730m.

For the period January-June, the value of exports is estimated to have increased by  four per cent to reach €555m. Seafood recorded modest export growth of two per cent over the period, following strong double digit increases over the previous two years.

The value of pigmeat exports was boosted by an increase of more than 10 per cent in average pig prices, which helped offset a drop of one per cent in output levels, to reach €250m.

Overall, the value of exports was 8 per cent higher at €105m, compared to €97m for the same period last year.

Finally, the sharp recovery in live cattle exports helped boost the value of livestock exports by more than 20 per cent.

The UK accounted for more than 41 per cent of total food and drink exports during the first half of 2013 driven mainly by higher meat and dairy exports.

Exports to other EU markets recovered from a difficult period in 2012 to account for almost 33 per cent of exports up to the end of June as increased meat, dairy, prepared foods and beverage exports boosted trade.

Stronger competition from European markets resulted in a slight decrease in the share of trade with international markets; however exports to Asia recorded double digit growth increasing by 15% to reach €270 million.

Later this year, buyers from China, India and other countries in the Asian region will be among 180 international food and drink buyers at Bord Bia’s Global Sustainability Conference, scheduled to take place in the Convention Centre, Dublin on 26 Thursday September.

More than 80 of these buyers will also participate in Bord Bia organised itineraries in advance of the conference. The event, which is expected to attract in the region of 500 delegates, including 300 from overseas, will feature speakers from Nestle, PepsiCo, Mars, World Wildlife Fund, The World Bank, McDonalds and Tesco and a high level panel representing Ireland’s dairy, alcohol, meat and seafood industries.

Bord Bia is also organising a Trade Mission to the Gulf region in October, which will be led by the Minister of Agriculture, Food and the Marine Simon Coveney TD.

This story was updated at 10.15pm with a graph supplied by Bord Bia