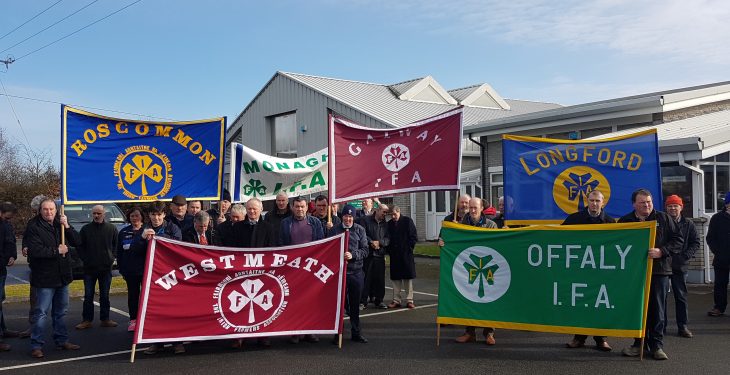 A selection of the protesters, from various organisations, outside the Regional Veterinary Lab in Athlone yesterday

Members from two farming organisations held a protest over the possible closure of the Regional Veterinary Lab in Athlone, Co. Westmeath today.

The protest was attended by close to 50 members of both the IFA and the Irish Cattle and Sheep Farmers’ Association (ICSA).

Taking place earlier this morning, the protest coincided with a visit to the facility by officials from the Department of Agriculture, Food and the Marine.

The ICSA believes the focus should be on enhancing services for farmers, not removing them, according to ICSA Westmeath Chairman Dan Lynam.

“Over recent years farmers have been endeavouring to improve their stock, particularly through schemes such as BDGP and Knowledge Transfer and now the new sheep welfare scheme, so when an on-farm death occurs they need to be able to receive a prompt diagnosis.

It is a resource that must be protected and ICSA is determined to keep up the pressure so that the service here and at all the other regional labs is retained.

The ICSA is meeting with Department officials this afternoon, following this morning’s protest.

Farmers have a number of questions as to how the proposed closure of these labs will work, Lynam said.

“For example, should these facilities be shut down, who will cover the cost of transporting dead animals to Dublin?

“We also need to know how many of the labs, including Backweston, can facilitate lorry loads of dead animals without investment?”

Lynam also said he will be asking the review committee what will be the implications of transporting infectious carcasses across the country if an outbreak of Foot and Mouth disease, or any other infectious disease, occurs.

“This would surely be a biosecurity risk. The movement of dead animals should be kept to an absolute minimum.

It would facilitate the spread of disease more than anything else. One has to remember that the beef and sheep trade is worth several billion to the economy and we have to protect that.

“We need to be prepared for any future challenges in the sector. Shipping dead carcasses around the country just makes no sense on any level,” he said.

‘An investment of €6.4m could enhance Regional Vet lab services’

For an investment of €6.4m over eight years, the structures in place in Ireland can be maintained and the services provided to farmers enhanced, he added.

“Department of Agriculture Regional Veterinary Laboratory services are highly regarded and are a vital support for farmers throughout the country.

The focus of the Minister for Agriculture Michael Creed and his officials must be on the enhancement of services to farmers in all regional sites.

“This structure facilitates the convenient and timely submission of samples by farmers and their vets when urgent, accurate and independent diagnosis of on-farm problems is required,” he said.

Roscommon IFA Chairman John Hanley believes the local Regional Veterinary Lab is best equipped to deal with the changing dynamics of farming and challenges from new and emerging diseases.

“The lab and staff in Athlone, with their local knowledge, close interaction with farmers and vets and key industry stakeholders, and ease of access for samples is the only approach that can provide the necessary support to farmers,” he said. 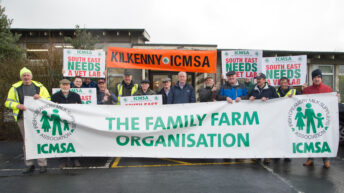