‘Farm inspections should be suspended in flooded areas’

Farm inspections should be suspended in flooded areas, according to the President of the ICMSA, John Comer.

He said that farmers are under enough pressure in these areas trying to mind and feed cattle.

“It is simply unacceptable that an inspector could arrive and expect the farmer to give up a day in many cases to carry out the inspection,” he said.

Farm inspections should be suspended until the flooding has receded, he said.

In relation to flooded slurry tanks, the ICMSA believes that the Departments guidance note to farmers is overly restrictive and doesn’t take account of the realities facing farmers on the ground.

The ICMSA states that the concession to pump water out of tanks is only available in areas severely affected by flooding.

There will be isolated cases of farmers whose tanks will be flooded for example, by a blocked bridge and such farmers need to be accommodated.

It also says the reality for farmers with flooded tanks is that they must get to the slurry opening date which varies from January 12 to 30, 2016 and these farmers should be allowed to actively manage this exceptional situation over this period without the risk of a penalty being imposed on them.

The current flooding of houses in rural and urban areas and farmland should come as no surprise to anyone, according to Comer.

Comer also said noted that too many bodies have authority over rivers but nobody wants to take responsibility and deal with the problems.

“These are the facts and the pace of dealing with these problems is simply too slow and it would appear that the needs of the people affected is well down the priority list of policymakers at national and EU level.

ICMSA has called repeatedly for the establishment of a National Waterways Authority whose sole role would be the management of Irish rivers from all perspectives but with flood prevention the number one priority.

“Such a body would also have complete responsibility for the river system and we would eliminate the current position of different agencies having different management roles over rivers and ordinary families being caught in the crossfire.

“People should be under no illusions that the events of the past week will be repeated again on a regular basis unless proper management of our river system from a flooding perspective is prioritised.

“Quite clearly at present, this is not a priority and one only has to look at the environmental restrictions being imposed at national and EU level to justify this statement,” he said,

Comer said that it is quite clear to anyone living along rivers that state agencies management and maintenance of river systems has been focussed on maintaining marine and other wildlife along the river systems.

This, he said, has been prioritised over the needs of people living in the river floodplains.

The policy of flood defences is simply pushing the problem further downstream to other people.

“It is quite clear at this stage that a national dredging programme of Irish rivers is required as a matter of priority and it is probably the 1960’s since this was done in the past.

“Irish rivers are getting clogged up due to a total lack of management and maintenance over decades and we now need to address this problem,” he said.

To achieve this, Comer said, that the immediate establishment of one body to manage rivers is required. 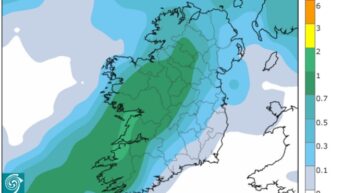