The European Commission has increased its estimates for both maize and barley production in 2015/16 in its latest balance sheet and forecast update.

Barley production in the EU has been raised to 59.5m tonnes from 58.6m tonnes forecast in April, according to the forecast.

Maize production in the EU has been raised to 68.1m tonnes from 66.3m tonnes forecast from April, it says.

This latest maize forecast is 12.5% lower from the estimate given at the same time last year while barley is down 1.2%, the figures show.

The forecast for EU soft wheat production remains largely unchanged at 141.5m tonnes down from 141.6m tonnes forecast for April.

Although this forecast predicts a slightly lower production figure, a recent report from MARS showed a slight upward revision in the yield estimate for soft wheat (5.93t/ha from 5.89t/ha) due to continued good growing conditions, the HGCA says. 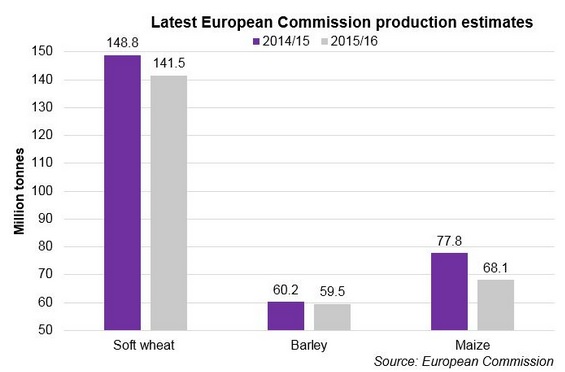 In contrast to the EU, recent bad weather in the US has raised concerns over potential crop damage to the US wheat crop in the US Plains, the HGCA says.

'Improved prospects for barley prices on the horizon'