‘Epidemic’: Knackeries see surge in demand with up to triple the norm in parts

There has been a noted increase in the amount of animals being sent to knackeries in recent months, but some have seen more of a surge than others.

Recently, the president of the Irish Cattle and Sheep Farmers’ Association (ICSA), Patrick Kent, noted that the amount of stock going into knackeries is double what is normal for this time of year.

Also Read: Fodder crisis: ‘No safety cushion for systems pushed beyond their limits’

In light of this, AgriLand got in contact with a number of animal collection facilities around the country to determine the extent of this increase.

According to knackeries contacted, overall the midlands and south-east of the country have been hit hardest with animal deaths in recent months – though it should be noted that the sample population comprised of six companies that were successfully contacted.

Speaking to a company in the south of the country, it transpired that the facility had seen a sizeable increase in animals coming in. While not double the usual amount, it was approximately 50% up on other years, a representative said.

In the south-east, however, a company that was contacted said that its business was at least doubled compared to the norm for this time of year.

This was down to the adverse weather in the main, a spokesperson said, with snow, storms and other difficult conditions all contributing to the rise in numbers.

A facility owner AgriLand got in touch with in the midlands said that it was the busiest period he had ever seen in 40 years of business, with employees having to work seven days a week.

The firm is handling more than 100 calls a day at the minimum, the owner added, with up to 150 calls coming in some days.

This was as a result of the cold and malnourishment, with farmers forced to feed bad fodder and now running out of fodder altogether, he added.

Describing the current period as an epidemic, the midlands owner said intake was triple the norm and far worse than the last shortage in 2013.

Instead of the couple of calves a day as usual, five or six cows are being taken in. The level of demand was also having a negative impact, as there wasn’t time to salvage as normal, the owner explained

A representative of a company located in the west of Ireland saw less of a demand; while animal intake had gone up a fraction, it was nowhere near double, the spokespserson said.

This was confirmed by a business in the north-west, who said that it was busy – but “not crazy“. There was an increase in calves and lambs, but “nothing extraordinary”.

However, the representative said that they suspected there would be a surge in three or four weeks’ time during the late spring / early summer.

There has been a big increase in calves and lambs, caused by overcrowding in sheds and infections spreading, the spokesperson outlined.

But, when they go out to grass – if conditions remain the same – there could be a rise, they added.

Meanwhile, in the east of the country, numbers were also up. This was largely down to the time of the year, however, according to another spokesperson. 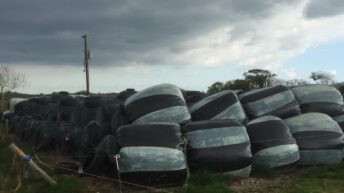 Fodder crisis: ‘No safety cushion for systems pushed beyond their limits’