‘Economic viability key to the success of automatic milking ’ 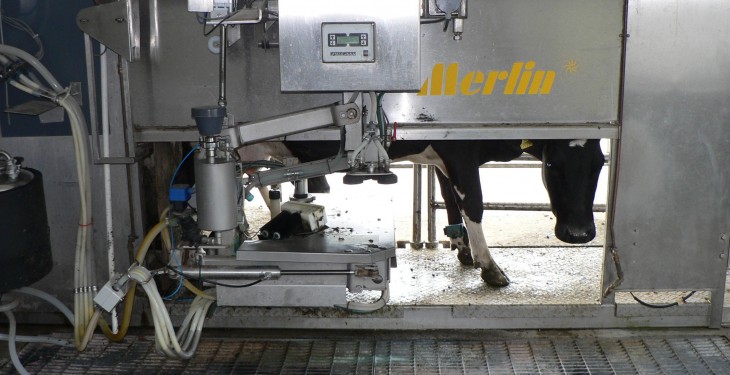 “The economic viability of automatic milking systems will determine how widely the technology will be adopted.” That is according to Dr Bernadette O’Brien of Teagasc, who is leading a project at Moorepark into the feasibility of integrating automatic milking with cow grazing.

Teagasc note in an automatic milking system a robot undertakes the manual work traditionally associated with milking a herd of cows. The system is set up to guide individual cows to come to a milking stall on a voluntarily basis on up to three occasions per day.

The research which is in its second year at Moorpark has 70 spring-calved cows of Friesian, Jersey-Friesian cross and Norwegian Red breeds.

According to Teagasc an average milk yield of 4,222 litres and milk solids yield of 369 kilograms per cow was achieved during the 2013 lactation. Even though 34% of the herd were 1st lactation cows, this level of milk production is still comparable with a large proportion of Irish dairy farms.

Total milk volume and milk solids produced by the automatic milking unit were 263,529 litres and 23,112 kilograms, respectively. The average number of milkings per day was 104, ranging from 70 to 123 per day in the March-to-August period.

The average number of milkings/cow per day was 1.8, ranging from 1.6 to 2.1. An average milk somatic cell count of 152,000 cells/ml was observed, while average total bacterial counts were at 10,000 cells/ml in the same time frame.

According to Dr Bernadette O’Brien, Teagasc, who is leading the project at Moorepark: “A major challenge with automatic milking currently is the high capital cost, but the concept of combining automatic milking and cow grazing has potential advantages, which could have a positive impact on the dairy industry in Ireland in the long term. These include: reduced labour input; farmer time to focus on management tasks as opposed to manual labour input; ability to expand cow numbers on fragmented land bases; and increased knowledge of cow performance data to use as a management tool.”

However, considerable research needs to be conducted to establish if the concept presents a realistic alternative to conventional milking systems on dairy farms. The fact that cow grazing systems have not been well adapted to automatic milking has led to a decrease in grazing on farms with automatic milking across Europe.

“This is an undesirable trend, since grass-based systems of animal production are becoming increasingly competitive. Allied to this is the positive impact on milk quality and reduced environmental footprint associated with increased quantities of grazed grass in the diet, as well as increased animal welfare standards,” explains Dr O’Brien.

The AUTOGRASSMILK research project, which is funded by the EU FP7, runs from 2013-2015. The system can be viewed at an upcoming Teagasc Open Day for all dairy farmers entitled ‘Breeding Strategies for an Expanding Dairy Industry’ which will take place at the Moorepark Dairygold Research Farm in Kilworth, County Cork at 10 am on Wednesday the 9th of April, 2014.