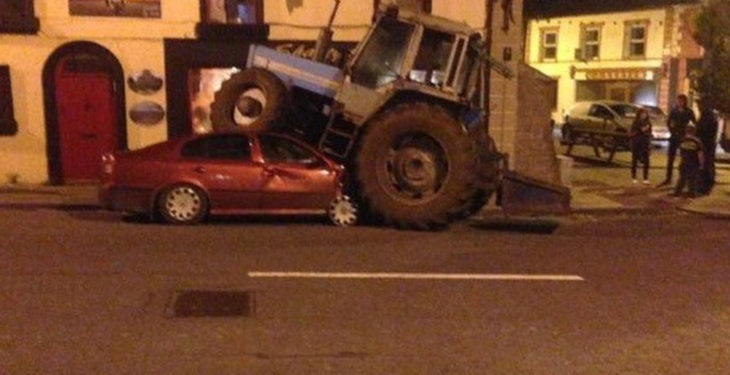 A 22-year-old farmer who drove his tractor onto the roof of a parked car in Kilkelly, Co. Mayo, has been been given a three-year driving ban and a fine, according to local publication The Mayo News.

Keith McHugh of Barnacogue, Swinford, Co. Mayo was arrested on Saturday, October 22, 2016, after he drove his Landini tractor through Kilkelly, before crushing a parked Skoda Octavia.

McHugh was arrested for drink driving, with a subsequent blood test reportedly revealing that he had a concentration of 232mg of alcohol per 100ml of blood – nearly five times the legal limit.

According to The Mayo News, inspector Tom Calvey purportedly said that after hitting the car, McHugh’s tractor ended up on its roof.

Defending solicitor Brendan Donnelly highlighted that McHugh had never been in trouble before.

When asked what McHugh had been doing on the night, Donnelly is believed to have said that he had been drinking in a pub.

Donnelly reportedly said that when McHugh left the pub, he got into his tractor and drove off. He had been unable to take a turn, ending up on top of the car in question.

Donnelly said his client had pleaded guilty to the charge, stating that McHugh fully cooperated with the Gardai at the time; this was confirmed by Calvey, The Mayo Times says.

Judge Mary Devins noted this cooperation when passing judgement, disqualifying McHugh from driving for three years and handing him a €300 fine.