Designated the 6155.4, 6165.4, and 6175.4, the new four-cylinder offerings are largely similar to existing six-cylinder versions, which were awarded the ‘Tractor of the Year for Design‘ accolade last year.

The 156hp, 164hp and 171hp Deutz TCD 4.1L, four-cylinder engines that power these tractors comply with Stage IV emissions requirements. In addition to a “compact cooling system”, which can be “opened completely” for cleaning, the TTV (stepless) models are also equipped with a new electric Visco fan.

First up is the “simple” five-speed powershift transmission (30F 15R). Next up is the more recent, “fully automatic” RCshift gearbox (30F 15R or a 54F 27R creeper version). Top of the transmission pile is the stepless TTV box – for continuous driving and working from 0 to 50kph.

On all transmissions, the maximum speed is achieved at a reduced engine speed – to save fuel. On RCshift models, the top speed of 50kph is reached at a fuel-sipping 1,530rpm.

Another key feature, according to Deutz-Fahr, is the front axle with independent suspension, which is equipped with an anti-dive and anti-rise control and a booster brake system.

The hydraulic system has also been adopted from the existing six-cylinder models. The standard pump capacity is 84L/min on the basic models; an LS system with a capacity of 120L/min is standard on the higher-spec models, with options of 160 or 170L/min.

Deutz-Fahr also had a brace of other products at the show, including its C5305 combine harvester; it’s described as a handy-sized, affordable machine – with a 180hp engine and a three-speed hydrostatic transmission.

Also present were larger tractors from Deutz-Fahr’s line-up, as well as other machines. 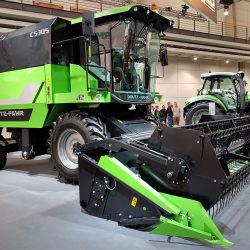 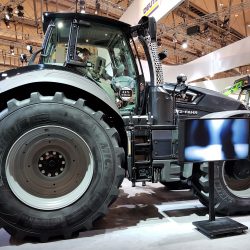 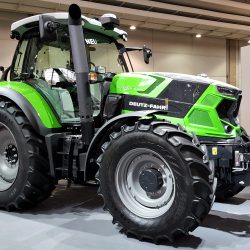