Deutz-Fahr has turned its attention to updating the 5 series and 5G series of utility tractors following the success of its larger models.

The new 5 Series includes three models from 110-126 horsepower and has been developed to be a comfortable, versatile all round utility tractor.

According to Deutz-Fahr, the updated models have been designed for a variety of farming applications, with the 5 series said to be suitable for everything from working on stock farms for feeding and loader work to arable and precise planting operations.

Meanwhile, the 5G Series includes seven models from 75-116 horsepower which provide an even more compact range with shorter wheel base and smaller wheel options available on the lower horsepower models.

This range of tractors is designed to be suitable for duties in tighter areas where versatility is key.

Cabs on all models of the 5 Series and 5G Series are now mounted on Hydro Silent Blocks, which cut noise and vibration by up to 40%.

With all engines now compliant with the Stage 4 emissions regulations, all models have benefited from a 5% increase in engine power and radically reduced fuel consumption and emissions.

The 5 Series is powered by a compact four-cylinder Deutz 3.6L engine, while the 5G Series includes either a three or four-cylinder FARMotion engine.

Larger models in the Deutz-Fahr range have received recognition lately, with the 6 Series 6215 RCshift tractor being nominated for the ‘Tractor of the Year 2017‘.

Despite the 6215 RCshift losing out to the Case IH Optum 300 CVX, it did win an overall award for ‘Best Design’ which was picked from all the tractors nominated across three categories.

There are 12 models available across the new 6 Series range, varying from 156-226 horsepower.

Advertisement
Available in two platform variants, three transmission types and two cab configurations with different comfort levels, the 6 Series is designed to meet the needs of all farmers or contractors.

The inclusion of new software for more efficient driving allows the 6 Series range to reach maximum speeds of either 40-50km/hr at reduced engine speeds, resulting in a saving on fuel.

The larger 7 series has also been designed with contractors and large farmers in mind.

Unique features in this tractor range include an adaptive front axle suspension system that guarantees maximum stability and traction while pulling heavy loads on the road or during tillage or field work.

Deutz-Fahr has also updated its range of combine harvesters, including improvements to six models across its C5000, C7000 and C9000 ranges.

According to the manufacturer, the C5000 range boasts a 4,600L grain tank, which is capable of discharge speeds of 75L/s, while all versions are offered with high performance cutter bars measuring between 3.6-4.8m in width.

The 4WD axle and exclusive anti-skid system is designed to allow the machine to work in the most extreme conditions, ensuring reliability and driver safety.

Deutz-Fahr offers a significant customer care service with close to 50 dealers located across Ireland and the UK. 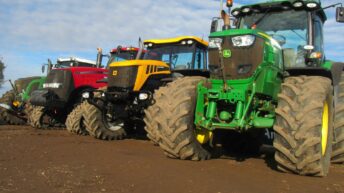 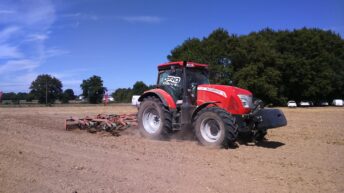