Dairygold’s Wrap It Pink campaign is back for 2016 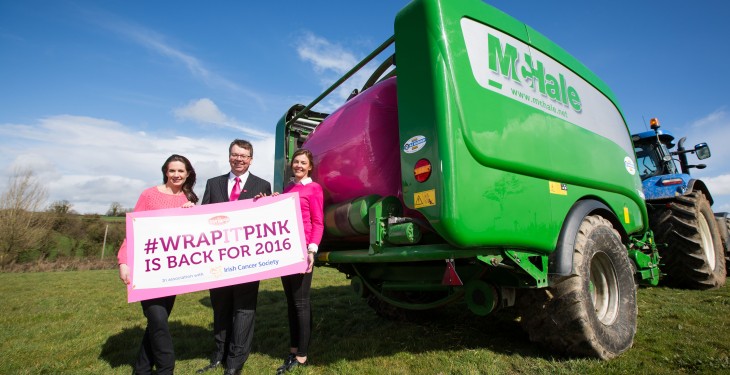 Dairygold has launched its Wrap It Pink campaign for 2016, in association with the Irish Cancer Society, which last summer saw fields across rural Ireland sporting pink silage bales.

Last year’s campaign was a success with Dairygold’s supplies of pink silage wrap selling out in a matter of weeks.

Dairygold’s pink wrap was available through their chain of retail stores, Co-Op Superstores across Munster and online raising much needed funds for the Irish Cancer Society.

John O’Carroll, Head of Retail at Dairygold Co-Op Superstores said that Dairygold is thrilled to launch the second year of Wrap It Pink.

“Last year it really captured the imagination of farming families across the country. We hoped to raise awareness of cancer in rural Ireland and raise valuable funds for the Irish Cancer Society.

“We were overwhelmed with the success of the campaign and underestimated the demand. This year we are ready! We hope that other agri-businesses and co-ops will embrace the concept and also offer pink silage wrap, in support of the Irish Cancer Society.

Commenting on the campaign, Mark Mellett, Head of Fundraising at the Irish Cancer Society, said that the society was overwhelmed with the success of Wrap It Pink last year.

Our social media was awash with eye-catching photos of pink silage bales last summer and we’ve received such positive feedback on the campaign, which we hope becomes an annual event in our calendar.

“Wrap It Pink is about supporting mothers, daughters, sisters, aunts, and anyone who has been affected by breast cancer.

“The campaign helps provide much needed funds for vital breast cancer research and services across the country.

Pink silage wrap will be available from Dairygold Co-Op Superstores across Munster and nationwide online from mid-April.