Dairy farmer gross margins are set to increase again this year on the back of strong performance in 2013 and will see the enterprise move even further ahead of other enterprises according to Teagasc’s Mid Year Outlook for Irish Agriculture. 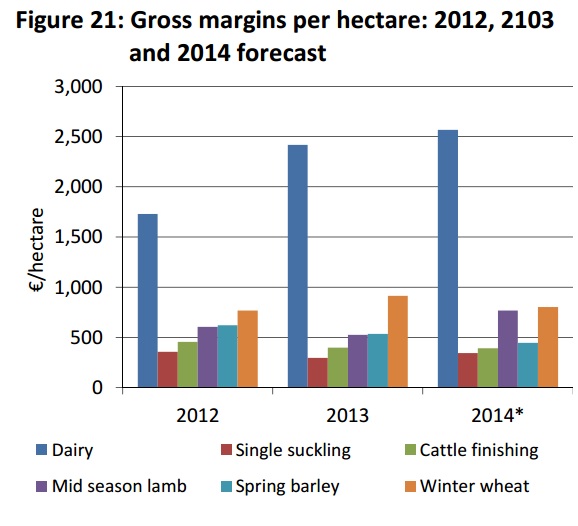 According to the authors of the report Trevor Donnellan, Kevin Hanrahan and Fiona Thorne: “At the mid-point of 2014 assessing the outcome for margins across the various grassland enterprises for the year as a whole is conditioned by the fall in feed, fertiliser and energy related production costs that will benefit dairy, beef and sheep farms in particular. This cost reduction is due in part to the fact that the fodder crisis has disipated, but also due to a more general easing of prices in grain markets and in the international fertiliser market.”

“Whether the fall in production costs translates into improved profitability across the grassland enterprises depends on output price developments.”

The report says it looks like sheep prices in 2014 will be higher than in 2013, ensuring a strong rebound in the margins earned from lamb production. While the average annual milk price will be close to that recorded in 2013 and with lower costs, it is likely that dairy margins will improve over those earned in 2013.

Turning to beef, the outlook for 2014 is more mixed. Prices for younger cattle are likely to only decline marginally in 2014 relative to their 2013 price level, with lower production costs, margins on single suckling enterprises, particularly those selling weanling and/or store cattle, are likely to improve, relative to 2013.

For Irish cereal producers, the improved global harvest will result in an output price drop in 2014 relative to 2013. The price reduction looks like being of the order of 10 per cent, but it will still be some time before an accurate assessment of international harvest volumes can be made. The cereal price reduction will be partially offset by a slight increase in yields for the wheat crop relative to 2013, but barley yields are expected to be on a par or slightly less than those achieved in 2013.

Cereal production costs per hectare should be lower in 2014 in comparison with the previous year. Overall, gross and net margins for winter wheat and spring barley are likely to be lower in 2014, as cereal price reductions outweigh cost reductions on most farms.