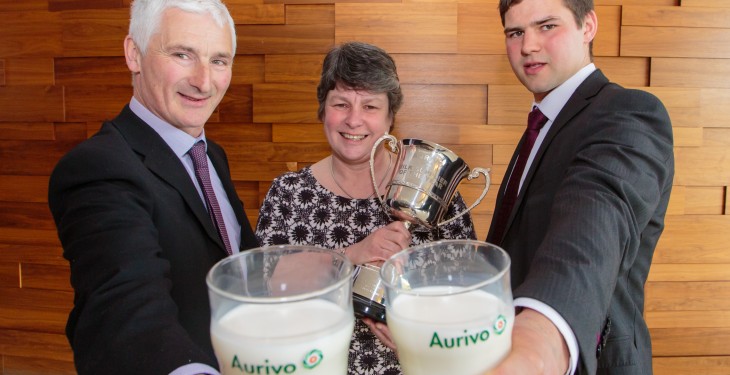 Eight Aurivo milk suppliers from seven counties were recognised for their excellence in milk production at the annual Aurivo Milk Quality Awards held recently in The Clarion Hotel in Co. Sligo.

The top award was won by brothers Ian and David Lamberton from Donegal. Milking 270 Holstein Friesians, the brothers are supported on the farm by their sons Gareth and Christopher.

“Aurivo processed record volumes of milk in 2015 and we continued to build strong partnerships with retail customers, while also growing our brands,” said Aaron Forde, Chief Executive of Aurivo, at the awards.

“From Aurivo’s portfolio of local, regional and national dairy brands to our dairy products destined for Africa, Afghanistan or Central America, all of our customers expect perfection in every litre of milk and every kilogramme of product.”

Forde said Aurivo can only do that with the work, support and excellence of its supplier base.

“The annual Aurivo Milk Quality Awards serve to highlight and reward dairy farming excellence in our region for the dedication and commitment of our milk suppliers, to producing the highest quality milk throughout 2015,” said Tom Cunniffe, Chairman of Aurivo, at the awards.