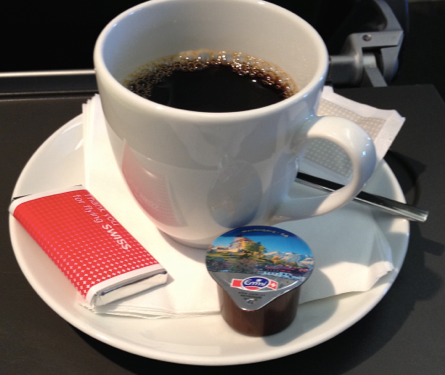 Swiss coffee on board a Swissair flight says volumes about the marketing of the Swiss food industry.

I had the good fortune to travel from Dublin to Zurich with Swissair recently. From the time you get on the plane in Dublin, until you pick up your bag in Zurich you are left with a strong sense of Switzerland’s clean green image, and of a culture with a deep tradition of producing quality food.

Everything about the customer-service on the plane embodied Swiss culture, namely excellent efficient service, and attention to detail. After a dinner of Swiss beef, complimented with Swiss cheese and Swiss wine, the coffee arrived. Even something as simple as a cup of coffee flaunted the attributes of Switzerland. The coffee was accompanied with world-famous Swiss chocolate, and the Swiss-made milk sachet contained a picture of the renowned Swiss Alps.

The essence of all things Swiss continued after the plane landed. The 60-second monorail journey between terminals is filled with sounds of people yodelling in the alps, together with the distinctive sounds of cattle chewing the cud, cow-bells ringing and the occasional cow bellowing.

Contrast this with landing in Dublin airport, and you are left with a sense that the Irish are obsessed with mobile phone offers, and promotions at electronic goods stores. With millions of tourists visiting Ireland every year you would think we should be doing more to make the connection in people’s minds that Ireland is the land of natural goodness and the best food. We should be making every tourist that visits Ireland a brand ambassador for Irish food from the moment they land in Ireland.

In recent weeks, both the ICSA and ICMSA have questioned the perceived value of the Beef Quality Assurance scheme. Some might argue against this ‘throwing out the baby with the bathwater’ approach. I would share this sentiment, but I would also argue that they are right to be taking a lead on this debate.

However, in order to move the beef industry forward, we need to take the emotion out of the conversation, and focus on the raw facts and figures. Of the €1.2 billion of fresh and chilled boneless beef exported from Ireland in 2013, 98% of the total value was exported to just eight countries. Less than 0.2% was exported outside of continental Europe. Compare this with our dairy industry. The Kerrygold brand alone is exported to over 80 countries, and it commanded a top-3 premium brand position in 50 of these countries. The fact that so much of our world-class beef is going to so few countries might indicate that;

Maybe it’s time for the Irish beef farmers to develop their own Kerrygold concept. The Irish Dairy Board, which has championed the global export expansion of Irish dairy products, is itself a co-operative. It came about through the joint initiative of both farmers and government.

With over €3 million euros of farmers’ money collected every year for an European Involvement Fund (EIF) levy, perhaps these monies could be put to use here? These funds could be used to establish the equivalent of the Irish Dairy Board for the beef industry. It would be an organisation owned by farmers, tasked with developing new markets, direct sales, and adding value to Irish beef for the benefit of Irish livestock farmers.