The country’s top prize for quality milk has been awarded to Kieran and Catherine O’Sullivan, from Dunmanus, Goleen, Co. Cork who supply their milk to Drinagh Co-op.

The winners of the NDC and Kerrygold Quality Milk Awards were announced in Dublin today with presentations to 13 top dairy farms by hurling legend Henry Shefflin and Minister Tom Hayes.

Runners up in the national awards are Denis, Siobhan, Barry and Jane O’Mahony from Shanakiel, Kilbrittain, Bandon, Co. Cork, who supply milk to Barryroe Co-op. 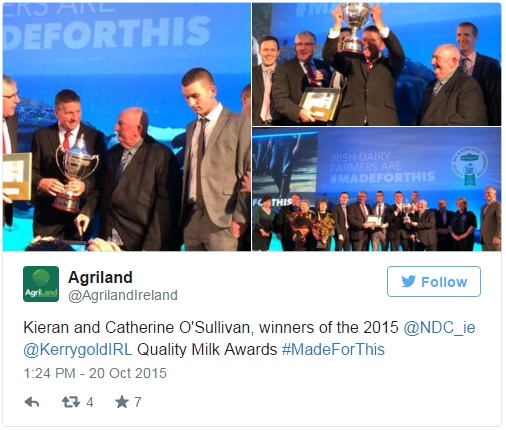 Overall winners Kieran and Catherine O’Sullivan, were accompanied by 18-year-old son Cathal, who farms with them and by Kieran’s parents Donal and Mary O’Sullivan.

They received a prize of €5,000 and the coveted NDC and Kerrygold Quality Milk Awards perpetual cup.

Kieran and Catherine are the fifth generation of their family to farm at Dunmanus, which is close to Mizen Head.

“I inherited how my father used to do things but am still learning every day,” says Kieran.

“Now I see how Cathal is learning the ropes and I’m very proud to be able to pass on this knowledge and expertise to my son.”

So many of our Irish dairy farms have been family farms for generations who have a deep pride in what they do, according to Zoë Kavanagh, Chief Executive of the National Dairy Council.

“Skills and heritage are passed down from father to son or increasingly from mother to daughter also.

“Through this award programme we see the passion for progressing and learning the newest and best way of doing things; combined with a heartfelt wish to take care of and improve on the farm, so that it can be passed on to next generation with care and pride,” said Kavanagh.

National Finalists presented with a commemorative plaque to acknowledge their excellence in dairy farming and achievement were:

Meet the winners at www.qualitymilkawards.ie