John Kavanagh and Teige Ryan, None-So-Hardy Forestry, with Minister of State at the Department of Agriculture, Food and the Marine, Andrew Doyle

The start of the 2017-18 forestry planting season and afforestation programme was launched by the Minister of State at the Department of Agriculture, Food and the Marine, Andrew Doyle, during a visit to a tree nursery in Co. Wicklow yesterday.

Since 1990, the forestry programme has invested over €2.5 billion in rural Ireland, resulting in over 300,000ha being planted with trees.

Commenting on the forestry programme, the minister of state said: “Forestry plays a huge economic, environmental, social and recreational role in Ireland and I am delighted that we are continuing our support for new forests again this year.

The current ‘Afforestation Scheme’ offers huge benefits to landowners and is an ideal opportunity to plant trees as part of your farming enterprise.

“Applications are now invited under the scheme – under which 100% of the costs of establishment are covered by the department and 15 guaranteed annual premium payments are also available.

“Over 13,000 Irish farmers received a forestry payment in 2016, while departmental records indicate that the most popular planting option attracts an annual guaranteed premium of €510/ha,” Minister Doyle added.

The minister also drew attention to the range of options available to interested landowners, stating: “There are 12 planting categories under the Afforestation Scheme to suit all scenarios and preferences including native woodland establishment, forestry for fibre, which has a short 15-year rotation, and agro forestry – where agriculture and forestry can co-exist on the same land. 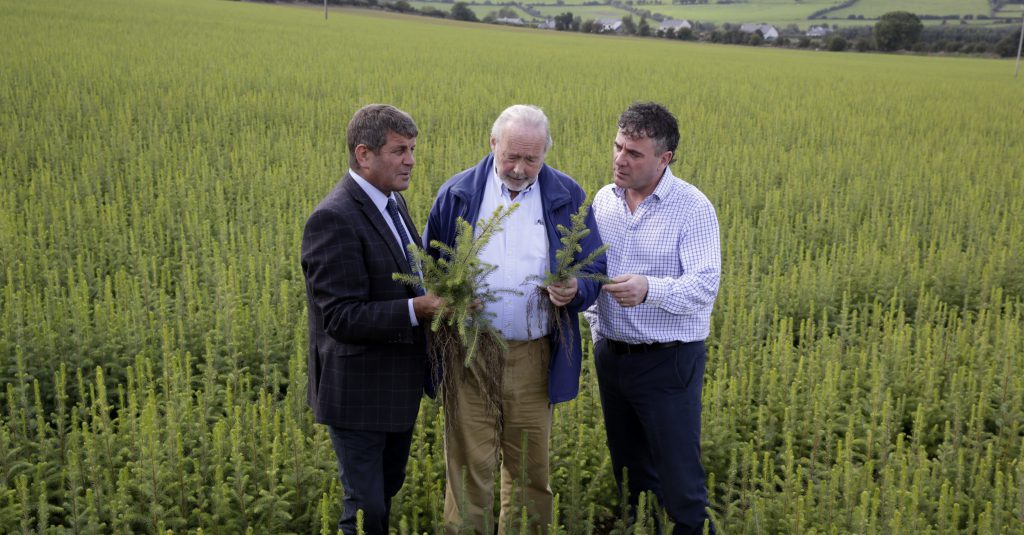 John O’Reilly, Greenbelt, and John McCarthy, None-So-Hardy, with Minister of State at the Department of Agriculture, Food and the Marine, Andrew Doyle

“The Afforestation Scheme (incorporating Native Woodland Establishment, Agro-Forestry and Forestry for Fibre), the Forest Roads Scheme, the Woodland Improvement (Thinning and Tending) Scheme, the Seed Stand and Seed Orchard Scheme, and the NeighbourWood Scheme are all currently open and I will shortly be launching the Native Woodland Conservation Scheme.”

The minister encouraged landowners to seriously consider forestry, saying: “Forestry does not have to be an alternative to agriculture, instead forestry should be seen as a complementary activity which is very much part of the farming mix.

Concluding, Minister Doyle said: “My department and Teagasc are keen to work with and support any interested landowners and I would encourage them to contact us or your local forestry company for a discussion on how to take the next step.”