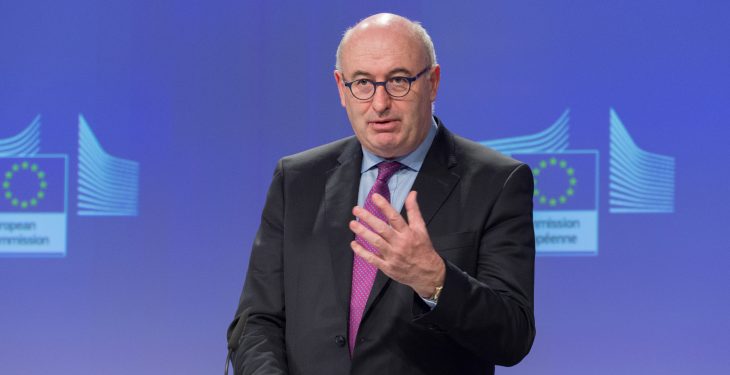 The Commissioner for Agriculture, Phil Hogan has said that he is very pleased that as the year draws to an end, the EU is making progress on an issue which matters to both farmers and consumers.

The week of December 12 was an important week for everyone who wants to change the fact that farmers currently get a raw deal in the European food supply chain, he said in a blog post before the festive period.

“Ministers also signed up to greater transparency on margins and prices, as well as agreeing clearer ways to achieve producer cooperation.

“This work builds on the European Parliament report – adopted in June by an overwhelming majority of 600 to 38 – calling for EU legislative action to tackle unfair trading practices.”

Commissioner Hogan said that these clear indications from the Council and Parliament constitute a strong mandate for action.

This is further recognised by the Commission Work Programme for 2017, which gives the green light to consider further action as necessary, to ensure that there is real balance in the food chain, he said.

“Accordingly, I told the High Level Forum that 2017 offers a real opportunity to strike while the iron is hot, working in parallel to other initiatives as part of a comprehensive approach to tackling problems in the food chain.

“Likewise, my colleague Elzbieta Bienkowska, Commissioner for Internal Market, Industry, Entrepreneurship and SMEs, in her thoughtful opening address to the High Level Forum, stressed that ‘now we need tangible improvement and a commitment to act’.”

The Commissioner believes the recommendations of the independent Agri Markets Taskforce, which he established to address this issue, constitute a roadmap for progress in many key areas.

“The High Level Forum adopted a Work Programme, whose three main clusters – fair and efficient trading practises; competitiveness and new opportunities in the single market; and price transparency within the food chain – are well chosen, and can make a very positive contribution to the debate.”

2016 therefore draws to a close on a very positive note. Now the challenge for 2017 is to translate all these excellent intentions into action.

A more resilient agri-food sector within a stronger, fairer food chain will benefit not just every farmer, but every single EU citizen, he said.

The Commissioner said that he is looking forward to working on this issue with Commissioners Vestager and Bieńkowska, and is confident that 2017 can be the year things start to really move.