Coca-Cola milk set to shake up the US dairy category 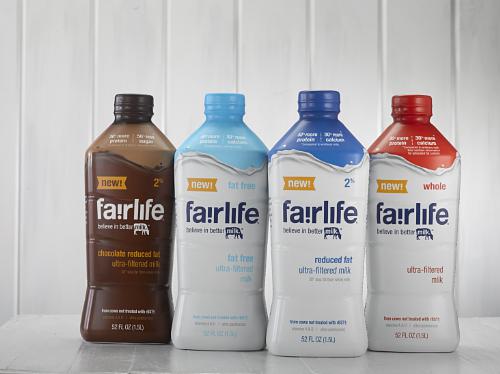 Coca-Cola’s venture in liquid milk, with its Fairlife brand, has started with its launch in the US.

Last year the company said the new product would ‘rain money’ for it, when it launched the protein-rich milk which will retails for double the price of standard milk.

The milk is being supplied by Select Milk Producers, the fifth largest milk cooperative in the country.

It is available in four varieties: 2% reduced fat, chocolate, fat free and whole.

According to the company, Fairlife is meeting the needs of today’s health-oriented on-the-go consumers, with three out of four people wanting more protein in their diet.

It goes on to say that Fairlife is transforming a household staple to provide families across America with the extra nutrition they want without sacrificing the wholesomeness and great taste they expect from high quality milk.

“It’s all part of Fairlife’s ‘believe in better’, from better farming everyday to better care for its cows to better nutrition made with high quality milk,” a spokesperson said.

It says that the key to its groundbreaking ultra-filtered milk is Fairlife’s patented cold-filtration that’s a true innovation in milk, enhancing its natural nutrition without the use of protein or calcium additives.

“Fairlife is a transformational innovation that retains the purity of real milk yet significantly improves its health benefits and taste,” says Mike McCloskey, a former veterinarian, active dairy farmer and CEO of the co-op.

Fairlife will be rolled out nationwide in the US by the Coca-Cola Company’s Minute Maid Division, and the company says it has no plans yet to enter the European liquid milk market.