The latest Rabobank survey of the world’s top dairy companies shows that the co-operative presence in the Top 20 is still strong, despite challenging conditions in 2013.

According to a DairyCo analysis sales growth was said to be moderated by weak economies and supply constraints, yet the Top 3 companies (Nestlé, Danone, Lactalis) are still closely followed by four of the most prominent global dairy co-operatives.

Rabobank highlights the opportunities for growth provided by acquisitions and joint ventures going forward. All the co-operatives in the Top 20 are expanding their presence in new markets and countries, such as China. The importance of the Chinese markets to the global dairy industry continues to influence this year’s Top 20 and, as forecast by Rabobank last year, a Chinese company entered the Top 10 for the first time.

No Irish-based dairy company made into the top 20 in 2013. For companies operating in the UK, Müller regained the two places it lost between 2011 and 2012, while Arla maintained its place. Its merger with Belgian cooperative EGM Walhorn is not included in the latest figures.

“Once again, giants Nestlé, Danone and Lactalis top the list, showing that the world’s largest dairy companies are reasonably entrenched,” commented Rabobank analyst Tim Hunt. “We continue to see some companies outperform their peers in sheer growth terms. In particular, the Chinese giants Yili and Mengniu, which saw their sales expand by 14% and 20% respectively, with Yili entering the top 10 for the first time ever”. 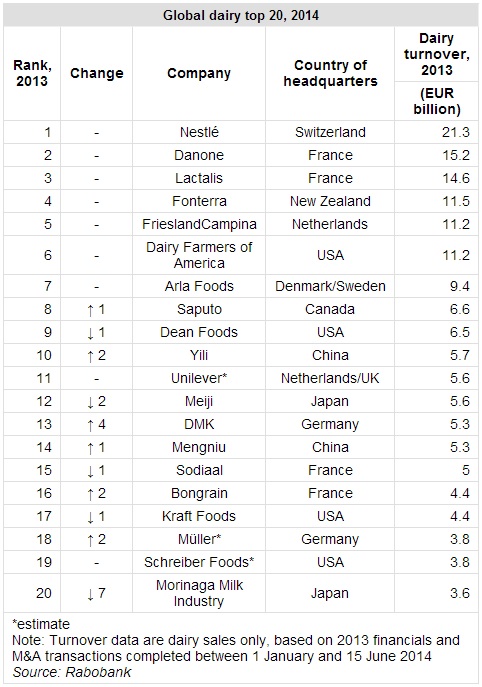