Charlie McConalogue, the TD for the Donegal North–East constituency, has been appointed as Fianna Fail’s spokesperson on agriculture, food and the marine.

McConalogue is from a farming background in Gleneely, Co. Donegal and studied Economics, Politics and History at UCD.

After working in Fianna Fail Headquarters for a number of years, as well as working abroad in Australia, Charlie returned home to work on the family farm before officially running for political office in 2009 and was elected as a Donegal County Councillor.

In 2011, he was elected a TD for Donegal North East at the first time of asking and he is a former Fianna Fail spokesperson on children.

The new Minister for Agriculture, Food and the Marine, Michael Creed has tweeted the new Fianna Fail spokesperson on agriculture his congratulations.

Congratulations @McConalogue on your new portfolio. Looking forward to working with you for the betterment of the sector!! 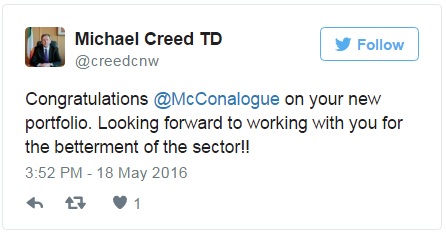