Cattle numbers set to tighten in the UK

Latest data coming from the UK suggests that cattle numbers will tighten over the summer mirroring the situation in Ireland.

According to EBLEX the expectation of tightening supplies as the summer approaches has been supported by recent data from BCMS which indicates that the number of beef-sired cattle on the ground in the imminent slaughter age range is notably lower than at this time last year.

EBLEX says this suggests that the balance in the trade could move into a position that is less out of kilter fairly quickly, particularly as the season is in its transitional period between yarded and grass-fed supplies. 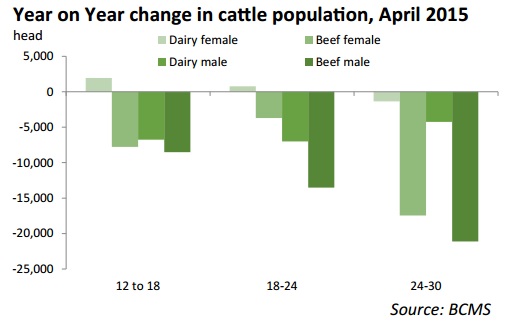 However, EBLEX also says with the current fine weather unlikely to stimulate demand for roasting cuts, caution amongst processors could persist in the short term.

This coupled with the euro exchange rate and its impact on the competitiveness of imported product, may well keep a lid on the trade, EBLEX says.

The latest AIMS data from April 1 shows the number of cattle aged between 12 and 36 months are down 181,000 head compared to the same period last year.

According to IFA National Livestock Chairman Henry Burns this confirms that the volume of finished cattle will tighten rapidly in the weeks ahead and should be back by 120,000-150,000 head over the next 12 months.

Burns slammed recent moves by some factories to lower beef quotes as designed to ‘destabilise’ the trade when numbers are tightening.

“All they are trying is to get another week’s supply at lower prices,” he said.