Feedlot buyers have made their presence felt at the ringside over recent days; short-keep cattle are particularly in demand.

However, more increasingly, they are finding tough competition from farmers, who are aiming to source stock before the peak grass buying period kicks into gear.

Weanling bulls – in particular – have met strong demand over recent days, as exporters and farmers go toe-to-toe to secure these lots. In addition, finished cows prices have also remained solid and many of the better-quality continental lots have achieved prices exceeding – or at the very least touching – the €2/kg mark.

Last Thursday’s sale in Castlerea Mart featured bigger numbers and the mart’s Brendan Egan said: “Forward store cattle, in particular, were a very lively trade in both the heifer and bullock rings.”

Egan added there was a noticeable increase in the number of calves on offer last Thursday. Dairy calves made €30-130, Hereford and Angus types traded at €150-270 and the continental lots sold to a top price of €400.

A large entry of cattle was witnessed in Raphoe Mart’s weekly cattle sale on Thursday last. The mart manager Anne Harkin said the trade was brisk from start to finish, due to the presence of farmers, feedlot buyers and factory agents.

Numbers were slightly back at Ennis Mart on Thursday last, the mart’s Michael Martin said. However, over 200 cull cows were on offer and continental types traded at €1.74-2.34/kg.

Continental-bred stock dominated the steer and heifer trade. Commenting on this, Martin said: “The bullock trade was strong, especially for the forward bullocks of 550kg and up.

Although numbers were back at Maam Cross Mart’s weekly cattle sale on Saturday, prices held well for all stock and great demand was evident around the ring.

The mart’s Eric Driver said he was glad to report that beef cattle continued to meet a demanding trade. Plenty of farmer customers, he said, were active around the ring for stores. Weanling bulls also met a very lively demand from both farmers and export traders.

In addition, beef heifers sold for €2.00-2.30/kg and a very active trade was reported for younger, fleshed animals.

In the weanling ring, bulls sold for €2.40-2.90/kg and some exceptional E and U-grade weanlings pushed over the €3/kg mark. Demand was equally as strong in the heifer ring and prices of €2.30-2.80/kg were achieved.

A number of cows also passed through the ring. The majority of the Friesian culls sold for €200-350 over, while the hammer fell on the continental animals at €300-950 over. 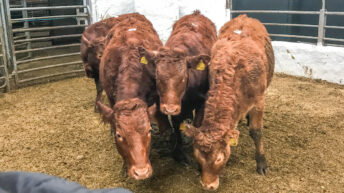 Pics and prices: Store heifers and bullocks in demand at Tullow Mart