With production of the new Case Maxxum CVX EP having only started at its plant in Austria last November, Case gave one of the much-anticipated machines its working debut in Ireland recently.

According to Case, the Maxxum CVX is the first four-cylinder Case IH tractor to incorporate a Constantly Variable Transmission.

Case said with slurry tanks full after prolonged wet conditions throughout the winter, the 130hp Maxxum 130 CVX was put to work on Michael Scott’s farm in Armagh, where full use was being made of the first decent spell of weather in many weeks to spread slurry on an area of light land.

The company claimed the Maxxum CVX has generated enormous interest in Ireland since a pre-production model was seen in December during an open day at Mid-Louth Tractors’ new depot in Ashbourne, Dublin.

Providing infinitely-variable forward speeds up to 50kph, the transmission is ideal for all applications, allowing precise control over travel speed for field operations, Case commented.

It also noted the transmission enables fast, economical road transport, with 50kph reached at just 1750erpm and 40kph at 1600erpm. The Active Stop Control facility holds the tractor safely in the stop position, even on hills, without having to operate the clutch.

It highlighted all three incorporate ‘Power Management’, which provides up to 32hp more in transport, hydraulic and PTO applications, together with Automatic Productivity Management (APM), which automatically reduces engine speed when power demand is low to optimise fuel efficiency.

Case is also keen to note that included as standard on the Maxxum CVX is Idle Speed Management, which cuts engine speed from 850rpm to 650rpm 30 seconds after the driver leaves the cab.

The company also stated that providing one of the most comfortable and quietest (71dB(A)) working environments of any tractor on the market, Maxxum CVX models incorporate the same ergonomic controls as larger Case IH models and can be equipped with AFS Pro 300 or AFS Pro 700 touch-screen monitors, making them ideally suited to AFS precision farming applications. 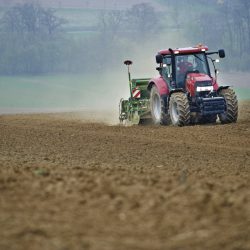