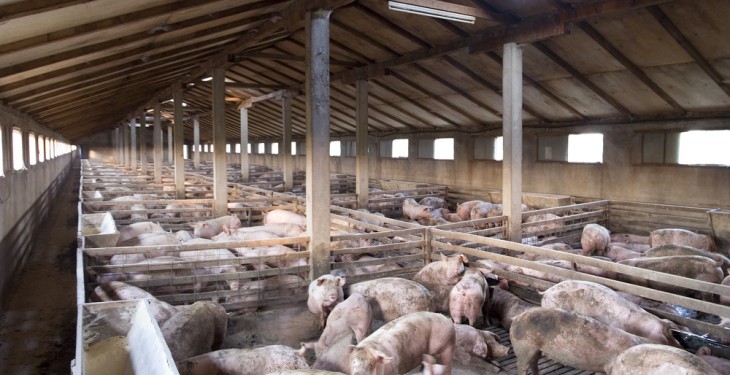 The number of pigs in Northern Ireland grew by almost a fifth year-on-year, as imports of fattened pigs coming here for slaughter rose in 2017.

It pushed pig figures up to their highest year-end level in over 30 years.

Norman Robson, chairman of the Ulster Farmers’ Union’s Pork and Bacon Committee, said it was likely pigs which had originally been destined for a factory in Scotland had contributed to the figures.

The fire at the McKechnie Jess plant in the north-west of Scotland gutted the factory in March last year, meaning pigs were unable to be processed at the site for several months.

As a result, many of the pigs made their way to Karro’s Cookstown factory.

Robson added that Cranswick’s takeover of Dunbia’s plant in Ballymena had had a “very positive” effect on the local pork industry by bringing more competition to the market.

The factory has increased its capacity as a result of investment by its new owners.

He said: “Prices had also been good for a year and a half, but they slid down around 15% in November.

“There has been an increase in supplies in Europe and, while there is still a premium demand for British quality-assured pork, some buyers can be tempted to import.”

This was mainly a result of growth in the number of ‘fattening pigs’ (up 19%), a figure which includes those imported to Northern Ireland for finishing.

These increased numbers reflect the growth seen in June at the time of the annual inventory. Total pig numbers in December were at the highest year-end level observed since 1985.

A department pork advisor said: “A small number of pigs are imported to Northern Ireland for fattening and the practice is a result of supply chains and farm business structures that operate across the border.

“A key metric in pig production is the number of fat pigs produced per sow per year. This performance indicator has steadily improved over many years. The productivity gain this represents is reflected in the growth in overall pig numbers.”

The drive on production also seems to be met with increased demand from consumers internationally.

Both EU and non-EU shipments increased last year – building on a record-breaking year for UK pork exports in 2016.

Pork sales to the US have increased in value, rising 2.7% to more than £23 million (€25.8 million) – with the UK’s reputation for producing high-welfare pork providing a gateway into the high-value food service sector.