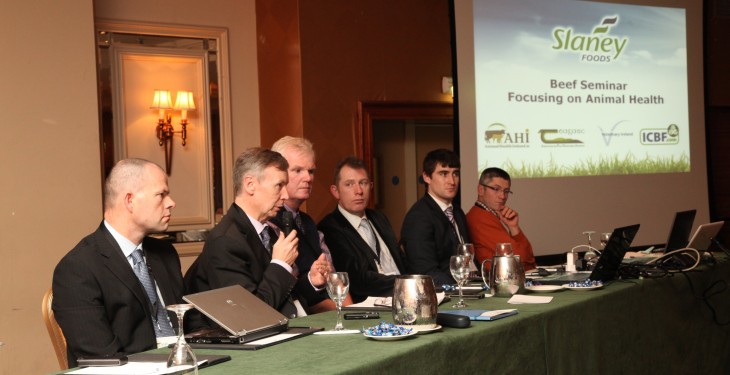 At a recent beef seminar organised by Slaney Foods positive results from the Beef Technology Adoption Programme (BTAP) were outlined to the farmers present, particularly in the area of animal health.

Conor Geraghty, a well-known Galway vet, said: “When it comes to on farm animal health risk analysis, the only way you can improve things is to get a vet in and identify the specific problems on your farm.

“That is the great advantage of the BTAP programmes. There is a real benefit to farmers to fix these animal health problems. They will have more animals to sell and those animals will be of higher quality,” he noted.

The BTAP programme was introduced in 2012 by the Minister for Agriculture and is based on the discussion group model.

In terms of the herd health plan element of the programme, Geraghty explained: “This involves farmers with the help of their vet creating a herd heath plan specific to their individual farm.”

He said: “It involves the farmer sitting down with their vet and identifying the animal health risks on the farm and finding out what’s causing the problem. Looking back over the last number of years an identify what issues are there.”

“The problems identified are then addressed in order of priority. It’s essential not to try to do everything at the one time. One or two main problems are identified and addressed. The plan is then to monitor and reassess as the year goes on.”

Finishes 150 bulls and 50 heifers under 24mts. He buys the cattle in as weanlings in late October and into the Christmas.

Three main risks were identified on the farm including pneumonia, parasites especially liver fluke and leg fractures especially among the bulls.

Geraghty said: “Firstly a plan was devised for when the weanlings arrive on farm to address the pneumonia problem. The first move was to switch the cattle from going into slatted housing to straw bedded sheds.”

Next the ventilation in the housing was increased by spacing the roof cladding and removing cladding on the side of the shed.

The plan also included a vaccination programme for IBR and RSV as well as putting areal focus on the liver fluke problem.

Finally to sort out the issues with bulls fracturing their legs in the sheds. Electric fencing was erected across the top of the pins in the shed to prevent the cattle from rising.

For this farmer Geraghty outlined that: “he saw a 60 per cent reduction in vet spend year on year, mainly coming from a big reduction in the instances of pneumonia on the farm.”

The next example he presented was a suckler farmer with 200 cows.

The spring of 2012 was particularly hard on the farmer in question.

He commented: “This particular farmer lost 18 per cent of his calves at 28 days which is way above average and represented 36 calves for the farmer.”

“If he brought them down to the mart at a week old and sold them the would be worth in the region of €15,000. It was a huge hit,” he noted

Geraghty stressed: “When things are going bad for a farmer in the spring it can be quite isolating.”

After a lot of investigation on the farm we found that the root of the problem was a severe deficiency in copper, selenium and iodine.

He outlined: “By just fixing the deficiency problem on the farm, calf mortality was reduced to 2 per cent this year. This represented a huge saving for the farmer.”

“The herd health plan takes time to do, if you want to do it right,” stressed Geraghty.

“The last thing you want to see is a farmer landing into the office the day before the forms need to be sent into the department. That’s a waste of time.”