Britain had the highest R3 heifer prices in the EU in the week ending August 17.

According to the Livestock and Meat Commission in Northern Ireland (LMC) prices in Britain increased by 5p/kg between mid-July and mid-August. There was a substantial uplift in Swedish prices, some of which may be attributed to a strengthening of the Swedish Krona against the euro.

According to the LMC french prices were broadly stable, and remain about 5c/kg ahead of NI R3 heifer prices. NI prices are 24c/kg ahead of the eU average.

Irish R3 heifer prices continue to lag the average EU price. The LMC says prices in Ireland have come under pressure since mid-July and in the week ending 17 August, prices stood at 364c/kg.

Prices are provided for the week ending August 17 and the week ending July 20. The table shows how prices have changed during that period and gives an indicator of where the highest farmgate prices are across the EU. 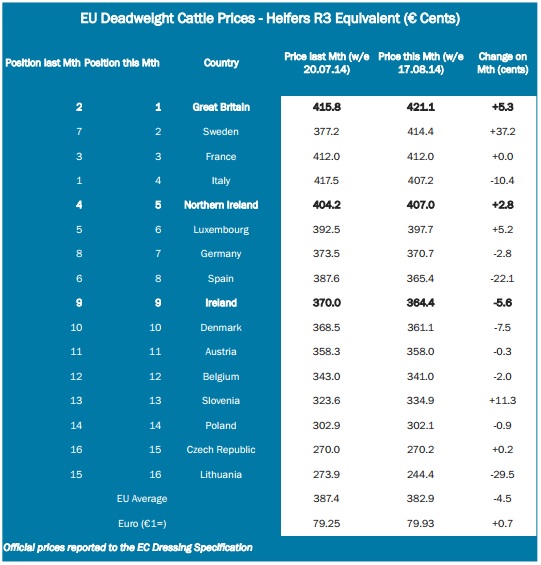