A formal request made by the Beef Plan Movement to attend the recent Joint Committee on Agriculture, Food and the Marine meeting on TB eradication was denied, according to the farm group.

The Oireachtas committee issued the refusal in a letter to the Beef Plan’s national animal health chairman Micheál Rafferty on October 2.

Reacting to the refusal, Rafferty, who is also the movement’s county chairman for Monaghan, said it was very disappointing that the views of Beef Plan and its farmers were not going to be heard on TB.

He said that this decision follows on from a decision by Minister for Agriculture, Food and the Marine Michael Creed to refuse the group access to the TB stakeholder forum earlier this year.

The Beef Plan representative claimed that generations of farmers have been living with the TB eradication scheme in various forms “for over 60 years now”.

Criticising the scheme, Rafferty described it as “not fit for purpose” and only paying “lip-service” to farmer concerns on wildlife.

“Whilst Beef Plan supports the views expressed by others who attended the committee, we want the scheme to deliver more, including better transparency around the scheme, its money, and for farmers’ hard work to be properly quantified and valued.”

Rafferty claimed that the latest refusal is “creating a trend” of the Government not wanting to hear views “from anyone who wishes to challenge their stewardship of the TB scheme”.

Rafferty said that the Beef Plan would rigorously pursue this issue and continue its efforts to have farmers’ voices heard, and this refusal will not be the end of this matter.

He said he has made contact with a number of political parties to have the decision reversed.

“In a recent ‘state of the nation’ survey conducted by AgriLand, respondents were asked ‘Which of the following farming associations, if any, are you a member of’, and the Beef Plan Movement was in second place behind IFA, at 29%,” Rafferty noted.

“It is clear that the Beef Plan has firmly established itself as a force within Irish farming within its first year of existence,” the animal health chairman concluded. 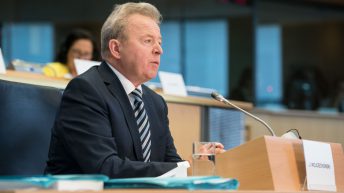 EU commissioner designate for agriculture undergoes another grilling from MEPs