Farming in Blackcastle, Twomileborris, Co. Tipperary, John Commins has been working the land since he was 15-years-old.

However, the family farm has changed dramatically since 2005. Commins, along with his wife Ann and three young children, runs a herd of 80 Piedmontese pedigree cows – bringing all offspring to slaughter under 20-months-of-age.

Over a period of 16-17 years, the family has expanded cow numbers. However, in 2011 the business took a leap in a different direction.

The Tipperary-based farmer became acquainted with fellow Piedmontese breeder Michael Fennelly, who farms in Co. Loais. Following a trip to the Piedmont region in Italy, where the two farmers discovered the nutritional value of beef, Irish Piedmontese Beef was born.

Research has shown that Irish-reared Piedmontese cattle have – on average – less fat, fewer calories, lower cholesterol but higher levels of protein  when compared with regular beef and chicken. It also contains less than 2% fat.

This is mainly due to Piedmontese cattle carrying a unique gene that promotes muscle growth or ‘double muscling’.

In 2005, after being informed that a finished Piedmontese animal can make an average of €2,500, Commins knew it was time to look into the venture. He travelled to Italy, with the Piedmontese Society in Ireland, where the Piedmontese beef is known as “queen of beef” or “rich man’s beef”.

On the trip, both Commins and his father-in-law purchased two breeding heifers each. However, when they returned from the trip he knew he had made a mistake.

When the heifers arrived in the yard I immediately knew I had made a mistake – I should have bought more.

“We returned straight away and bought another 20 breeding heifers each. Originally, the plan was to breed the heifers and to sell the offspring back to Italy,” he added. 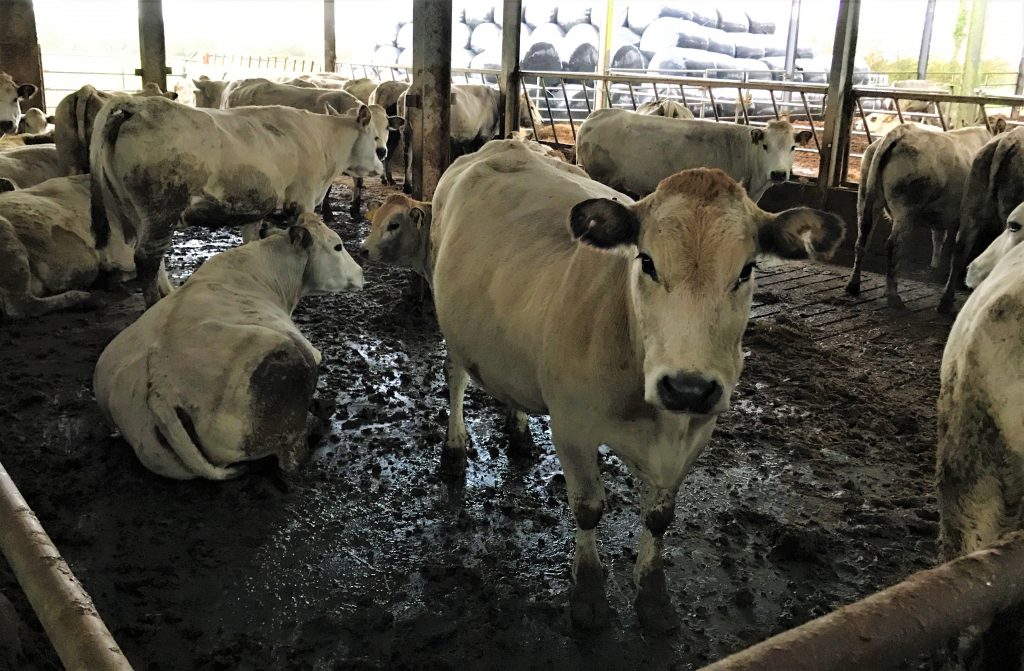 “When we started to eat the meat and realise how tasty and lean it was, we knew there would be a market for it here.”

Commins operates a spring-calving and an autumn-calving system; ensuring that there are cattle available for slaughter all-year round.

He has three stock bulls and groups them according to calving difficulty.

“All the bulls are pedigree Piedmontese animals. I use a real easy-calving bull on my heifers. I have an easy-to-moderate calving bull for my second and third time calvers.

Every calf is born brown and it’s coat will turn white with age.

Commins added: “The third bull is used on my older cows. I had about a 5% section rate with him this year and a 100% survival rate.” 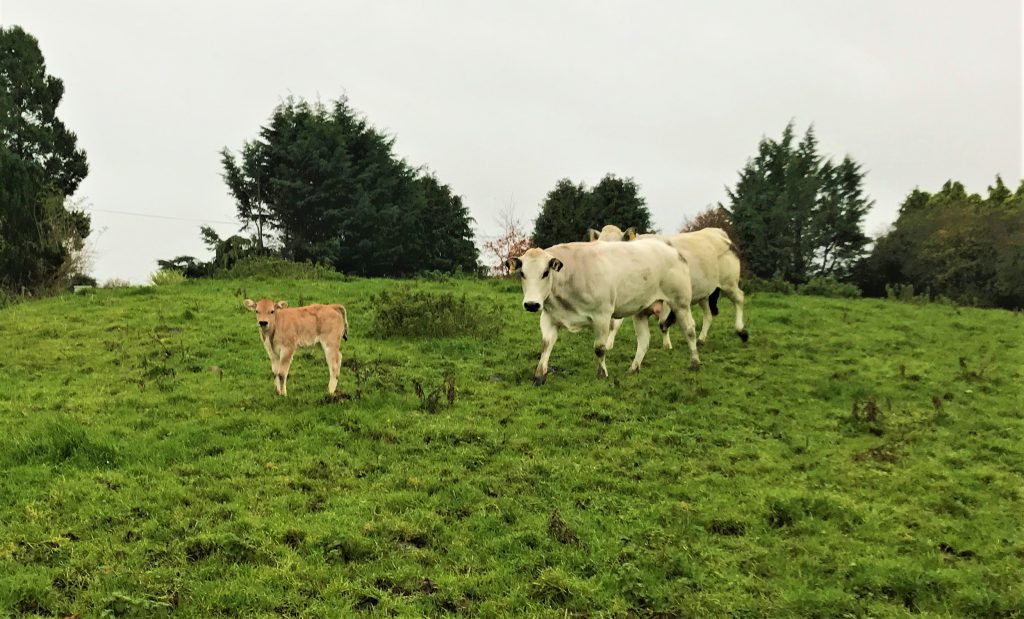 The bulls are allowed run with the cows for a 12-week period. Commins is aware of the dangers associated with breeding cattle indoors.

“The bull or cow can get injured very easily when mating is taking place indoors. I have the wood-chip pad which has a roof as well. It’s a great job and that’s where the autumn breeding takes place.

“Sometimes I will use AI on the autumn-calvers. I can buy the straws off of the Piedmontese society and they’re not that expensive. It also helps that the animals are very docile,” he explained.

This year, after scanning, Commins had a 5% empty rate, which he is extremely happy about.

These empties will be culled from the herd and sent to Holland and I breed all my own replacement heifers on  the farm.

Commins continued: “I have had selenium deficiency problems in the past. All animals will get one ‘All Sure’ bolus before and after calving. I find them very effective.”

The farm is split into 30, 4ac paddocks. In the spring and summer months, the cows are split into groups of 20.

Naturally, heifers and bullocks graze separately. 30ac of silage is cut and baled at the end of May. Surplus bales are also taken off of the grazing platform if paddocks go too strong. 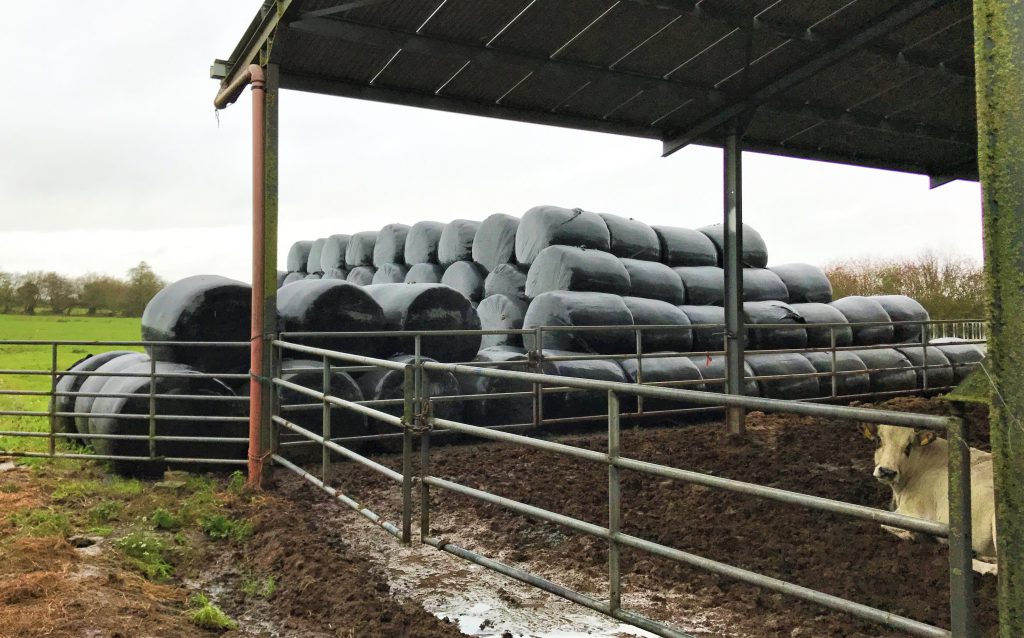 “We have a mixture of land here. Half is dry and the other half is wet and boggy. I try to do about 5% reseeding every year, but I’d like to do more,” he explained.

Commins also cuts 30ac of hay every year, which he says, is a great feed for his animals.

“The drier feed is better on the gut. I find the wet-silage is not as good,” he stated.

I feed hay to the in-calf cows because it keeps the calf  small.

During the winter period, he groups cows according to body condition score (BCS) and adjusts feed allowances accordingly.

“Body condition scoring is very important for the Piedmontese herd. They can lose condition quickly. I keep an eye on their condition and hand pick less-fleshed cows and give them some extra feeding,” he added.

All offspring are finished ‘out of the shed’ under the age of 20-months. Finishing animals are fed a high-maize ration ad-lib. They are also fed hay ad-lib as a source of roughage.

“I also make sure they have a good supply of hay and water when finishing the animals, as it prevents acidosis,” he explained.

Commins also sources pedigree weanlings from other breeders around the country and finishes them under 20-months-of-age. 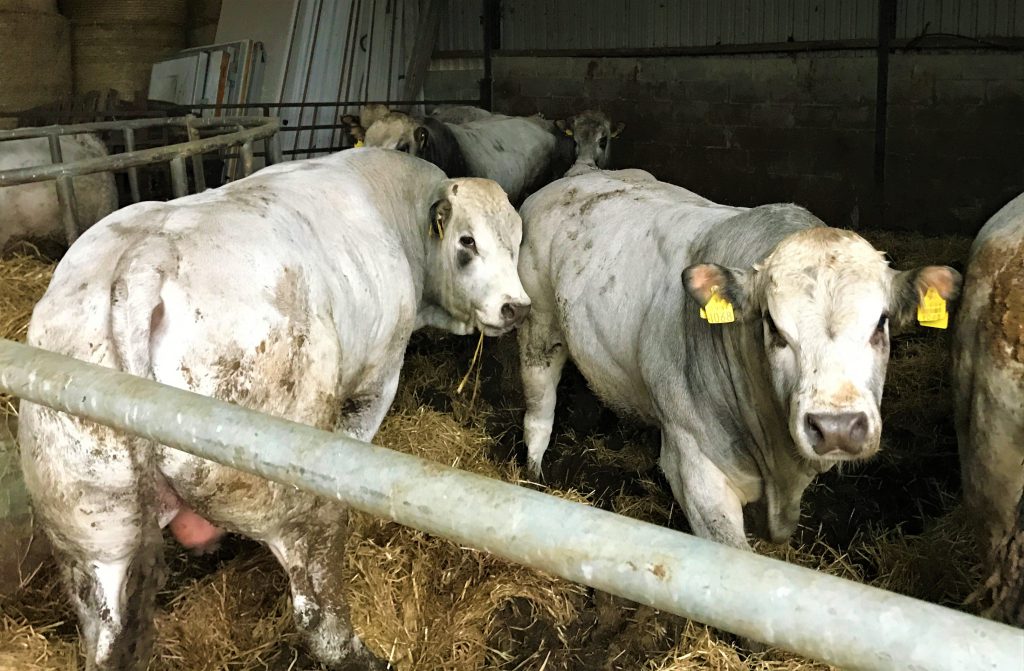 The animals are currently slaughtered and de-boned in Moyvalley Meats. Commins and Fennelly receive the meat back in primals. Currently they are killing two or three animals per week.

“We have a small facility rented where we produce mince; burgers; beef sausages; steaks; roasts; stir-fry beef; and stewing beef. We also have a vac-pac machine for packaging the product.

Looking into the future

Commins is happy with the direction the company is going. They now supply restaurants, supermarkets, butchers and have direct sales online.

It’s been a learning curve from the beginning to now. We felt we had a really good product and we ran with it.

“We have won numerous awards for our product so we are really happy with that,” he said.

Commins has recently got planning permission to build his own cutting plant for de-bonning his carcasses on farm. He hopes to get it up and running next year.

The planning permission was a long time coming but we have it now. I want to get it up and going as soon as possible.

Commins gave his view on Brexit, he said: “I have no idea what is going to happen. It’s going to be a big challenge.

“I’m going to stay the way I’m going and I’m not going to waste time trying to figure out what the outcome will be,” he concluded.