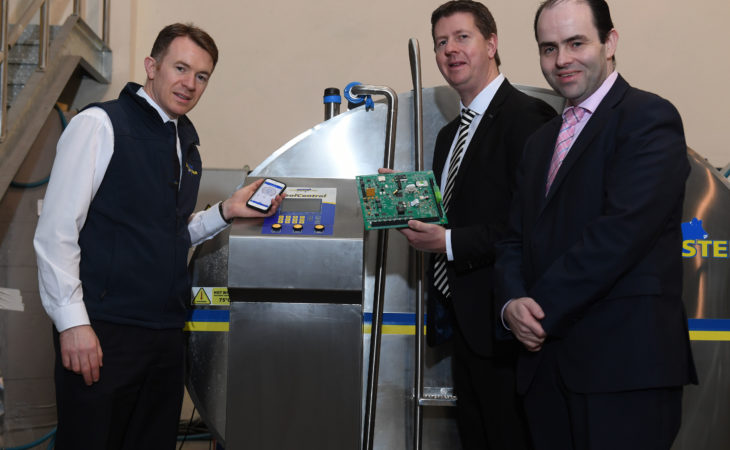 Automating labour-intensive processes will be hugely beneficial to farmers, according to Dr. Joseph Walsh – head of the School of STEM and Lero researcher at IT Tralee.

Dr. Walsh was speaking as a €2 million research and development (R&D) programme was agreed between Dairymaster, IT Tralee and Lero – the Irish Software SFI Research Centre.

He said: “The availability of skilled labour has been identified as one of the key challenges to the dairy industry.

Automating labour-intensive processes will not only be hugely beneficial to the farmer, but will also enhance animal health and milk quality by ensuring tasks are completed to consistently high levels.

It is hoped that farmers could soon be able to avail of artificial intelligence to assist in managing their farm as a result of the new partnership announced today. The programme is backed by Science Foundation Ireland.

A team of researchers are expected to be hired – including PhD students as well as post-doctoral scientists and engineers – to work with Lero and Dairymaster R&D teams.

The researchers will have a range of skills from embedded electronics and sensor technology to software development and data analytics, according to Dairymaster.

The project will offer researchers a “unique opportunity to conduct cutting-edge research, while being embedded as part of an award-winning R&D team”, it added.

Commenting on the partnership, Dairymaster CEO Prof. Edmond Harty said: “Dairymaster is committed to providing the best possible technologies to our customers and this is the key reason why we are investing in this area.”

Advertisement
As part of the R&D programme, Lero and Dairymaster will look to develop autonomous systems to ease the workload on dairy farms.

The development of ‘Internet of Things’ technology to boost milk quality and animal health is also included in the R&D programme.

This is set to involve the application of advanced data analytics to boost dairy farm productivity, combining existing Dairymaster equipment – such as the MooMonitor+ health and fertility monitoring system – with data from new sensors and monitoring technology, Dairymaster explained.

This will utilise data analytics and machine learning to automatically generate predictors and classifiers for dairy cow health and productivity, it added.

Dr. John Daly, research and innovation manager with Dairymaster, said: “We see this whole area of artificial intelligence and autonomous systems as being key to the future of dairy farm profitability and sustainability and we are delighted to be involved in the largest indigenous project in Lero.”

‘An international centre of excellence’

Dairymaster has a history of collaborative research with partners such as Teagasc, UCD, IT Tralee and now Lero and the University of Limerick (UL).

Commenting on the programme, Prof. Conor Ryan – Lero researcher at UL – said: “This exciting programme is further evidence of Dairymaster’s commitment to innovation over five decades, which has helped to make it a global leader in dairy equipment manufacturing.

Advanced R&D programmes such as this can help Ireland become an international centre of excellence in the use of robotics, Internet of Things and data analytics on the farm.

Founded in 1968, Dairymaster employs 350 people; it operates from its headquarters in Causeway, Co. Kerry, as well as having operations in the UK and the US.