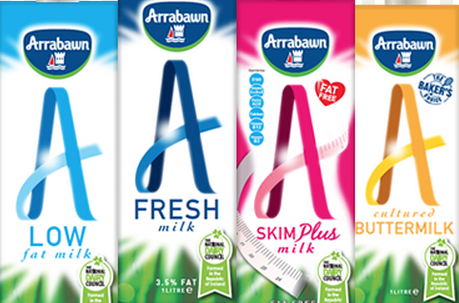 Arrabawn has reported a record turnover of €220.5 million for 2013 in its results which is publishes today.

As a result of very strong growth in sales in both the dairy division and the agri trading division, especially in the second half of the year, turnover at Arrabawn Co-operative reached a record €220.5 million in 2013, the Chief Executive, Conor Ryan, reported when announcing the annual results at the co-op’s Head Office in Nenagh.

“This increase represents a growth of 19% on the previous year and is the first time that the co-op sales exceeded the €200 million mark” he said. Overall, 2013 turned out to be very good for the Society, and the key indicators from our results show the progress we made during the year, he said.

Mr Ryan said that the sales growth of 25% to €149.5 million on the dairy side of the business, which equated to an increase of €29.66 million, was driven by both higher returns from the market place and increased milk throughput.

In the liquid milk sector, he pointed out that it had become increasingly important for Arrabawn to protect their own range of products because of the ever-increasing threat to branded milk from the growth in sales of own-label brands. As part of this strategy they had successfully rebranded the Arrabawn range and are receiving a very positive response to this from consumers.

“We are continually reviewing our business operating model in the light of the fast changing market place where consumers are continually looking for value for money. As a result, the retail market has undergone substantial change in the last two years and we are ensuring we have an operating model in place that is best suited to cope with this change. Consequently we have to  continually reduce our costs and this will be achieved by increased automation both in the manufacturing and the despatch areas” he said.

Mr Ryan also stated they had carried out substantial work during the year on the manufacturing plant to ensure Arrabawn has sufficient capacity in place for 2015 when milk quotas come to end. The casein plant has been fully upgraded as part of this programme and preparations are being made for connection to the natural gas network in 2015.

The increase in sales in the Agri Trading Division by 9% to €70.6 million was due, mainly, to the huge demand for animal feed during the fodder crisis in the first half of the year.

“This was an exceptional situation, during which we had to import substantial tonnage of hay from the UK to cope with the scarcity here, and hopefully we will not experience anything like it again,” he said.

He also confirmed that the co-op had successfully integrated their two feed mills onto the one site at Limerick during the year. The result is that we now have a fully commissioned and highly automated feed mill on this site which is perfectly placed to service the demands of our ever increasing customer base, he said.