We often talk about milk price, but how well do we understand it? Agriland is launching a Farmgate Milk Table for the Irish dairy industry. This monthly table aims to be the most transparent source of base price milk information in Ireland.

In this pricing table you will see:

Presently, the Agriland Farmgate Milk Table does not include milk quality bonuses. Rather it highlights the constituent values that the majority of co-op farmer members are paid. We hope this table will help farmers better understand what drives the value of milk, namely the constituent value.

Another key factor in milk price is the processing charge. For example, Arla’s Denmark’s constituent values place them well down the classification. However when you factor in Arla’s “-C” of <1.5 cents per litre, you realise that their price per litre exceeds all other Irish co-ops. Equally so with Lakeland and Arrabawn co-op. Even though they appear in the bottom half of the table on a constituent basis, their favourable “-C” costs place them 3rd and 5th respectively on a cent per litre basis.

A third, and very important aspect of milk price is value that quality can have on the milk price. We hope to tackle this key feature of milk pricing in the weeks to come.

There is a lot of change happening in how our international competitors price milk. Since January of this year, FrieslandCampina have moved away from an A + B – C system to a payment system in which they will pay for Fat + Protein + Lactose. FrieslandCampina state:

“With the abolition of the milk quota at the beginning of 2015, the present system in which fat and protein play a dominant role is no longer fully in line with current market demands…. Lactose is of prime importance for the production of infant and toddler nutrition, one of FrieslandCampina’s key growth categories”.

Ireland proudly boasts >10% of the world’s infant formula production. Lactose is a key ingredient in its production. The graph below illustrates how lactose imports into Ireland have skyrocketed in recent years. Lactose imports have more than trebled from <13,000 tonnes in 2007 to 47,050 tonnes for the first 11 months in 2013 alone. The value of these imports has increased from €23.5 million in 2010, to €75.2 million for the first 11 months of 2013, a threefold increase. The currently level of imports equate to a milk equivalent of one billion litres per annum. >80% of these imports originated from Germany and the Netherlands. Other European co-ops are also focusing on extracting more value from Lactose. Arla Foods, Denmark announced in September of last year that they plan to invest €120m on a new 85,000 lactose plant next to their “Denmark Protein” whey processing plant in Denmark. 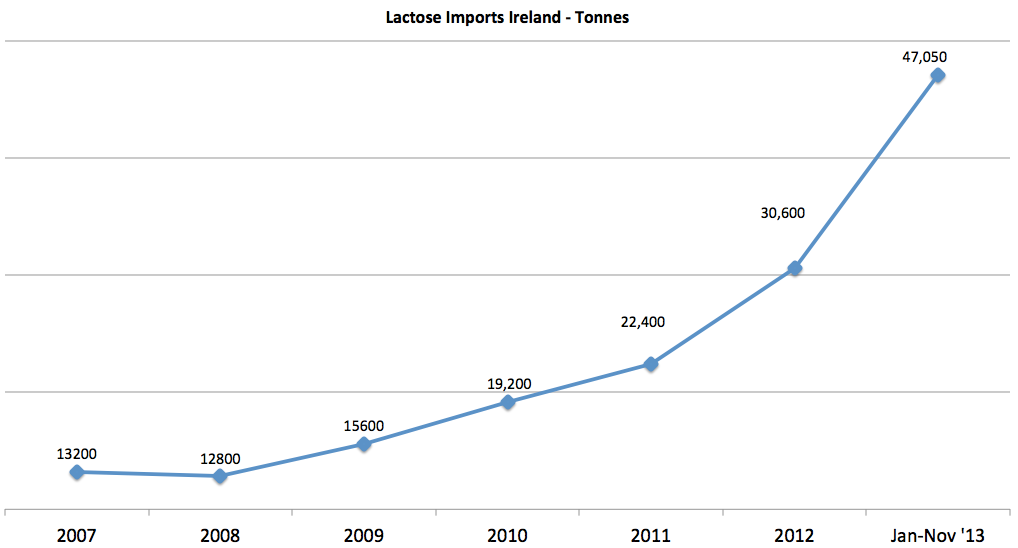 A first step towards understanding the complexities of the international global dairy market is for Irish dairy farmers to better understand milk prices. Within Agriland we aim to help farmers better appreciate the nuances and complexities of milk pricing structures. We believe that the introduction of this Farmgate Milk Pricing Table is a helpful step in this direction.