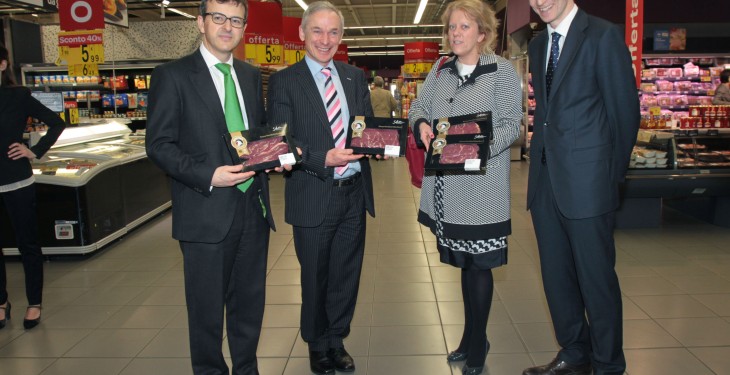 ABP Food Group has agreed an exclusive deal with Carrefour Italia to supply its Irish Hereford prime beef range of products. The deal will see ABP provide beef to more than 160 Carrefour stores, following a trail period earlier this year in 40 stores.

The deal builds on Irish Hereford Prime’s successful sponsorship of the Masterchef Italia Show on Sky UNO, where it benefitted from exposure to the show’s three million viewers.

Commenting on the announcement, McDonnell said: “Our partnership with Carrefour Italia is confirmation of the demand for Premium Irish heifer and steer beef in European markets. We are delighted to see that the continuing synergy between ABP and Irish Hereford Prime has led to the first Irish branded beef product on Italian retail shelves.

“This deal builds on the phenomenal interest generated by the partnership between Irish Hereford Prime and Masterchef Italia this year.”

Carrefour Italia is one of Italy’s biggest supermarket chains, with more than 1,180 stores and an annual turnover of circa €6bn per annum.

Gregoire Kaufman, commercial director of Carrefour Italia, said: “We have built our success on providing our customers with high-quality fresh products and are delighted with this exclusive partnership with ABP to provide Irish Hereford Prime beef in our stores.”

Michael Cleary of the Irish Hereford Prime Society in Ireland said: “We have been working in partnership successfully with ABP since 1997 to promote the sale and export of this great breed around the world. We are delighted that Carrefour is bringing the taste of Irish Hereford Prime to the Italian market and are confident that customers will enjoy the taste of this grass-fed premium beef.”