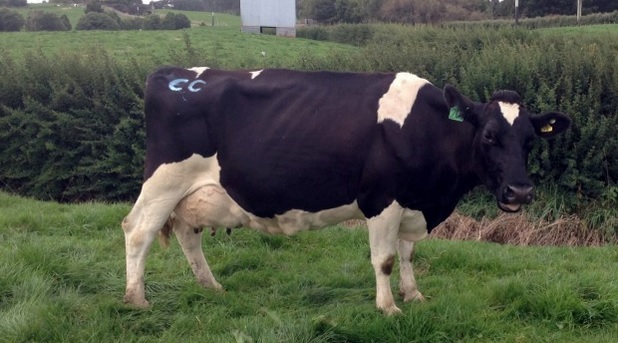 The six-year old is a friesian and its breeding worth and production worth are what contributed to the cows high price.

The cows owners, Irene and Colin Kelly, are retiring from farming and have sold their farm. They then held a sale of cows on their farm recently where the cow was sold.

“It was just bid, bid, bid. And it wasn’t just one bidder. There were four of five bidders on this cow. It was amazing and it kept on going up and we were thinking, ‘oh my god’,” Irene said to stuff.co.nz.

Its confirmation, stature and milking capacity were outstanding and it had milked 900kg milk solids a year, the website says.

The cow had been under contract with Livestock Improvement Corporation for several years, meaning LIC were able to choose the bull it got in calf with, Irene said.

She’s a machine. She’ll have a calf, and cycle and five to six weeks later you inseminate her and bang – she’s in-calf.

The cow, known as number 209, also had a high lactation worth, which measures the expected ability of the cow to convert feed into profit in the current season.

PGG Wrightson sold the cow and Irene said that the stock agents suspected the cow would sell well because farmers had formed syndicates to bid on the animal.

“They put it out there and there was a lot of inquiries about her, and there were people coming into the farm before the clearing sale,” she said.

According to the Kellys, there was nationwide interest in the cow, with farmers travelling from the South Island to bid for her.

Previous to the sale, the website reports that the Kellys were offered $3,000 and $4,000, however they wanted to give others the opportunity to buy the cow so they refused these offers.

It is reported that a local farming syndicate purchased the cow.