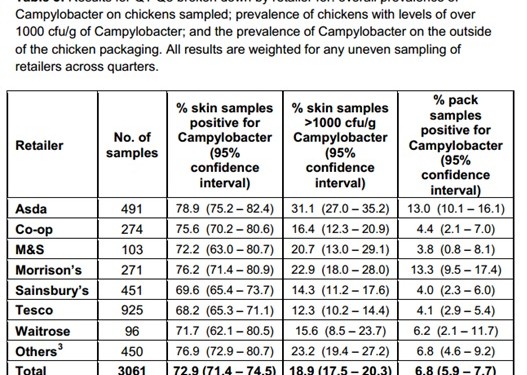 Over 70% of raw chickens tested positive for the presence of campylobacter, the Food Standards Agency (FSA) in the UK has found.

The FSA has published the latest set of results from its year-long survey of campylobacter on fresh chickens, a food bug mainly found on raw poultry. It is the biggest cause of food poisoning in the UK, the FSA says, and 73% of chickens tested positive for it.

The results are an accumulation of samples taken between February and November 2014.

The results also state that 19% of chickens tested positive for campylobacter within the highest band of contamination.

The highest band of contamination is stated as being above 1,000 colony forming units per gram (>1,000 cfu/g). The survey also showed that 7% of packaging tested positive for the presence of campylobacter.

“More than 3,000 samples of fresh whole chilled chickens and packaging have now been tested.

“Data continue to show variations between the retailers but none is meeting the target for reducing campylobacter,” the FSA said.

The following FSA table shows the overall prevalence of Campylobacter on chickens sampled broken down by retailer.

“Our survey is putting pressure on retailers to work with poultry processors to do more to tackle Campylobacter. We want the industry to reduce the number of the most highly contaminated chickens as we know this will have the greatest impact on public health,” Steve Wearne, FSA Director of Policy, said.

“Campylobacter is killed by thorough cooking, but it should not be left to consumers to manage the risk. It is the most common form of food poisoning in the UK, affecting an estimated 280,000 people a year.

“Poultry is the source of the majority of these cases, so the industry should be making every effort to ensure chickens are as free from Campylobacter as possible before they reach customers,” he said.